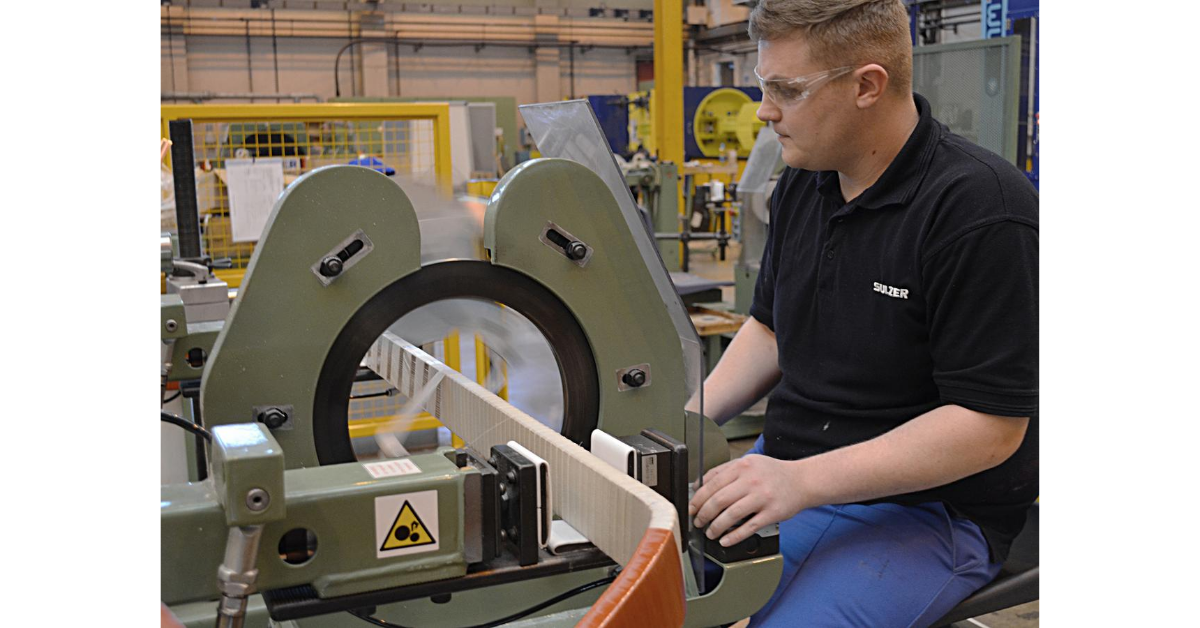 High pressure gas compressors are vital pieces of equipment that reduce the volume of the gas before it is transferred to shore from a floating production storage and offloading (FPSO) vessel. The owner of one such unit off the coast of Ghana called Sulzer in to carry out an inspection, which uncovered a long-term defect that needed to be resolved.

In the first instance, the original equipment manufacturer (OEM) was contacted and asked to complete a repair to the motor. A repair to the connections was completed, but as soon as the motor was restarted, it immediately failed. At this point the OEM suggested that an offshore rewind would not be possible and the platform operator did not think the motor could be removed for an onshore repair.

Sulzer has a regional sales director in Ghana who has regular contact with the operators of the FPSO. Although they are well-acquainted with Sulzer’s expertise in pump design, manufacturing and maintenance, other areas of the company’s knowledge have remained unexplored. During one particular meeting, an issue was raised about the high-pressure gas compressor motor and Sulzer offered to investigate the issue.

Working on offshore vessels, especially those involved in the oil and gas industry, requires specialized training to ensure everyone’s safety. Fortunately, Sulzer has a number of suitably qualified engineers, and some of these were dispatched to the FPSO to carry out an initial inspection.

Testing of the windings found very low insulation resistance readings and various discussions were held to determine the best course of action. The motor would need to be dismantled to precisely locate the problem and Sulzer’s initial suggestion was a complete rewind, performed onboard the vessel. 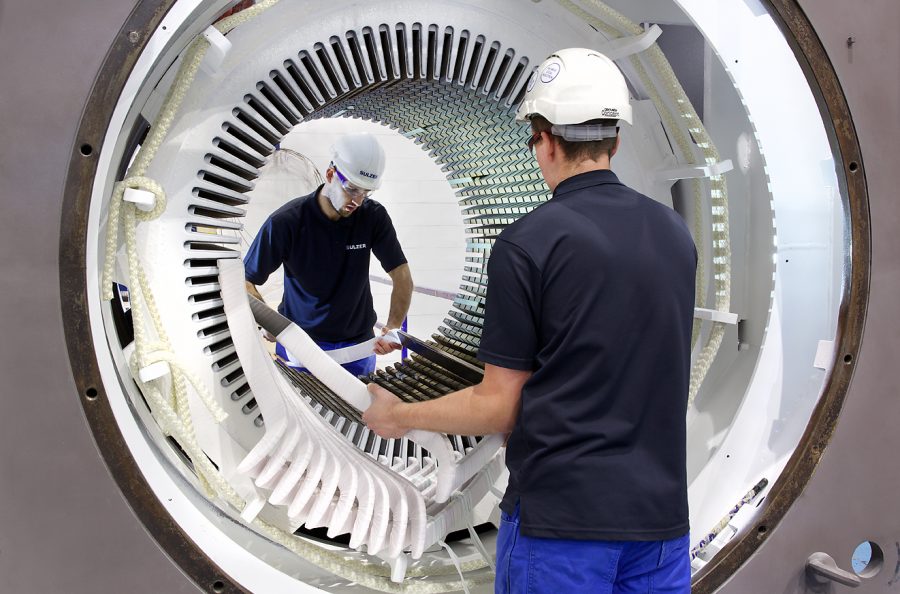 Working round-the-clock, the stator rewind was completed on time

Once Sulzer’s engineers had the motor separated into its component parts, they discovered that it would be possible to remove the motor from its operating position and transport it to an onshore location. This presented a number of advantages to the repair project, not least the ability to carry out a full-load test on the motor once it had been repaired.

During discussions between the operator and Sulzer, it transpired that the gas compressor had been modified to increase its output and this had required additional power from the motor. In fact, rather than operating at 8.5 MW, the motor was required to supply 9.3 MW, so the ability to deliver full-load testing as part of the project would offer very good confidence levels in the future reliability of the motor.

Meanwhile, once the decision to complete the rewind onshore was taken, Sulzer’s field service engineers took all the necessary measurements of the windings and sent the information to the Falkirk Service Center in Scotland. The coil data was verified and issued to the Birmingham Service Center in the UK, which has a 24-hour high voltage (HV) coil manufacturing facility. At the same time, the motor was air-freighted to Falkirk, where the rewind would be completed.

Marc Stuart, Service Center Manager in Falkirk, explains: “In these applications, speed of response is very important; downtime on such vital pieces of equipment can run into millions of dollars. We fully expected to complete this project within the 45 days that had been agreed with the customer and we worked round-the-clock to get the stator rewound and the motor reassembled.”

The new windings, designed and manufactured in Birmingham, have increased the copper content by 1.82% by using the latest in insulation material technology, which has improved since the original coils were manufactured. Even this modest increase will have an impact on efficiency and the operating temperatures of the coils. 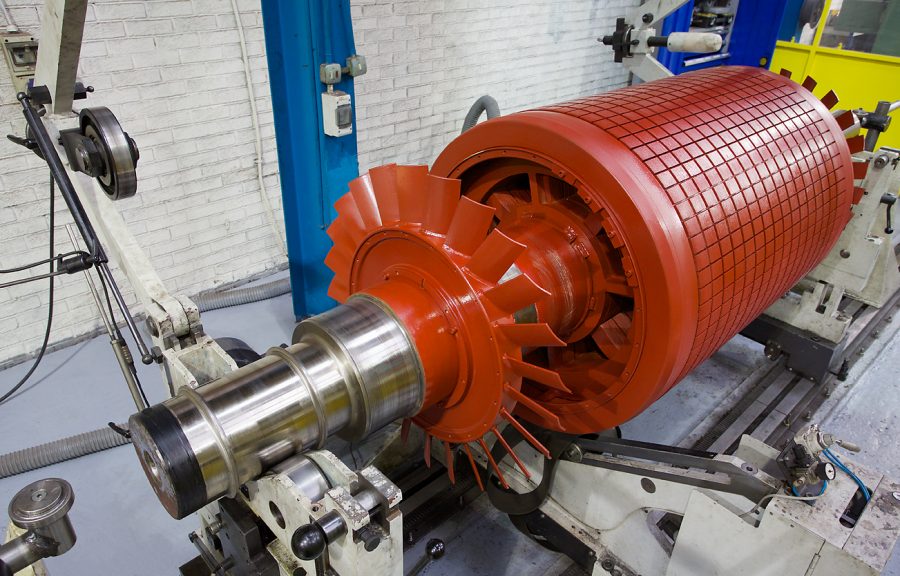 The rotor was dynamically balanced before being reassembled and tested

For projects of this size, Sulzer works with ATB Laurence Scott, which is also an OEM for high voltage motors, and has one of the largest motor test beds in the UK. This facility was used to carry out a full-load test, which was witnessed by Sulzer and staff from the FPSO. Since the motor had been in operation for almost 10 years, no significant issues were expected.

However, during the full-load test, a cooling issue with the original design was identified where air flows were unbalanced, with the non-drive end receiving air at 13 meters/second, while the drive end airflow was negligible. At this point, an investigation was instigated and the delivery time for the motor was suspended until a suitable solution could be found.

Design engineers from Sulzer held extensive discussions with ATB Laurence Scott and the customer to work out the options for a robust and reliable solution. The process of making alterations to an original design must be carefully considered, especially when they are located at the center of a motor rotating at 1’800 rpm and operating in a potentially explosive atmosphere.

Following a comprehensive design process that ensured the new parts could withstand the stresses of normal operation, and they could be easily installed, the manufacturing process got underway. Once complete, the new parts were installed and the full-load test repeated; this time with no anomalies and well-balanced air flows.

The motor was returned to Falkirk, where it was dismantled and packaged for airfreight back to Ghana. Sulzer’s field service team returned to the FPSO and completed the installation and commissioning of the motor, which continues to operate reliably. Having established the quality and reliability of the work completed by Sulzer, the customer is now looking to have similar work completed on an additional five motors, which potentially have the same design flaw.

About Sulzer
Sulzer is a global leader in fluid engineering. We specialize in pumping, agitation, mixing, separation, and application technologies for fluids of all types. Our customers benefit from our commitment to innovation, performance, and quality and from our responsive network of 180 world-class production facilities and service centers across the globe. Sulzer has been headquartered in Winterthur, Switzerland, since 1834. In 2019, our 16’500 employees delivered revenues of CHF 3.7 billion. Our shares are traded on the SIX Swiss Exchange (SIX: SUN). 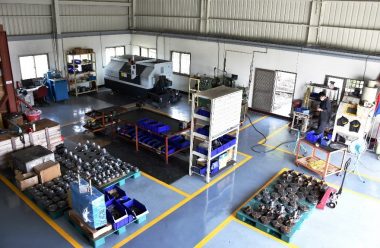 Cook Compression® is proud to announce Zungtech Co., Ltd. as its exclusive distributor and Authorised Service Partner within the territory… 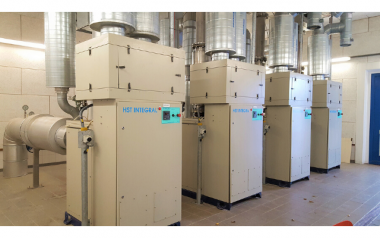 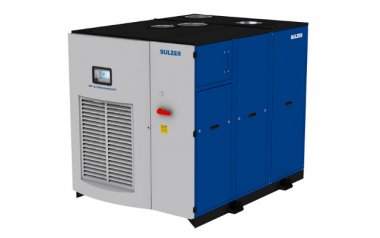