Home » The Many Advantages of Gear Pumps
PSG October 5, 2022 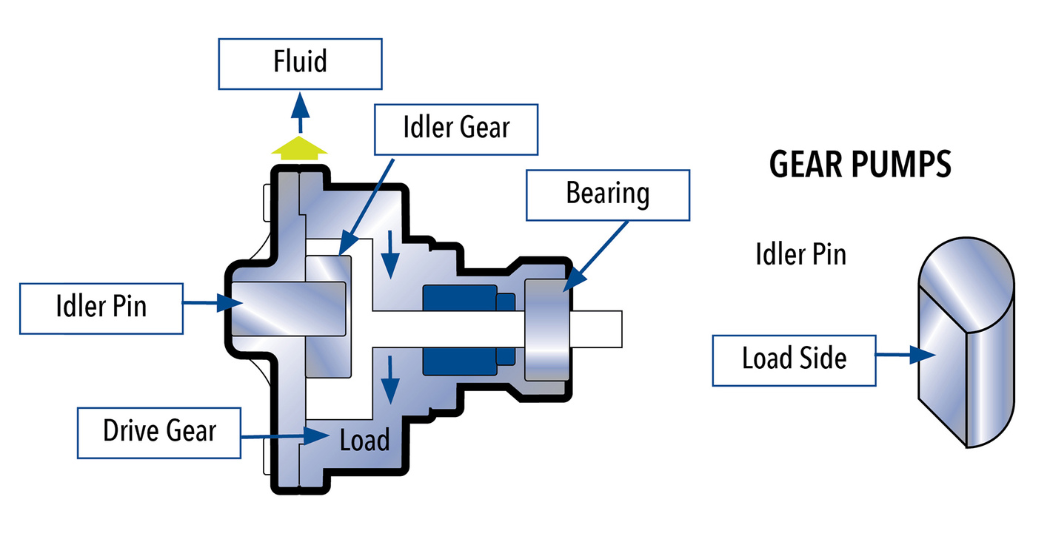 Pump technology can be traced as far back as the BC era in ancient Egypt, a time when Egyptians used a shadoof to move water from one source(in this instance –wells) to the other. While basic in nature, this set the stage for others to follow, such as the ancient Greeks who developed the first concept for a reciprocating pump to Nicolas Grollier de Serviere, a Frenchman who created the early design for a gear pump near the back end of the 1500s.

This technology has substantially evolved since those times and is now woven into the fabric of everyday life. Pumps can be found in a range of applications, such as tank trucks, ships, trains, manufacturing plants, storage tanks and bulk storage facilities. While water was one of the first liquids to be moved via pump, the technology has improved to process many other fluids. Gear pumps, for example, are designed to move an expansive range of critical commodities, including crude oil, biofuels, refined fuels, chemicals, solvents and food-grade materials.

While so many pumping technologies have been developed and optimized throughout history, one type of pump stands out for its versatility, efficiency and longevity –gear pumps. These pumps, which come in internal or external designs, have endured multiple applications and fluids across time and continue to provide operators with several distinct advantages over comparable technology.

This article will discuss those advantages and why gear pumps remain a popular choice for operators across several industries when handling a range of liquids. 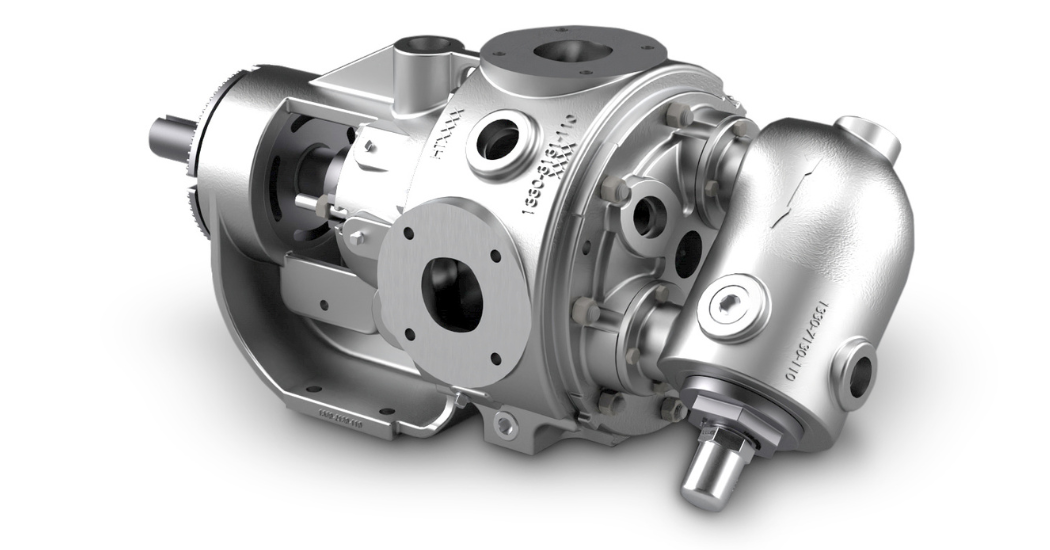 As the gears turn: A closer look at gear pumps

Gear pumps create flow by pushing liquid through a mesh of teeth from two or more rotating gears. A drive shaft moves one gear, and that motion moves the other gear. The rotating gears form a liquid seal inside the casing, creating a vacuum at the inlet as the gear teeth separate. Liquid flows into the space and moves around the outer edge of the gears. Once the teeth meet again by the outlet, the gears force the liquid out. 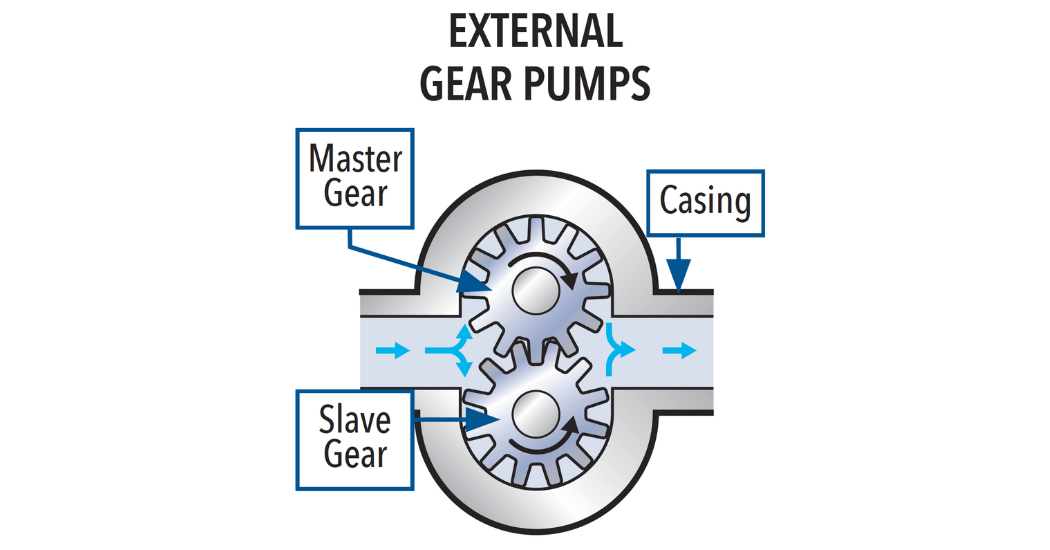 Gear pumps come with either an internal or external configuration. External gear pumps use two separate shafts to support two interlocking gears, which form a mesh at the center of the pump to move fluid along. External gear pumps are known to use either helical, spur or herringbone gears to move liquid through the pump. 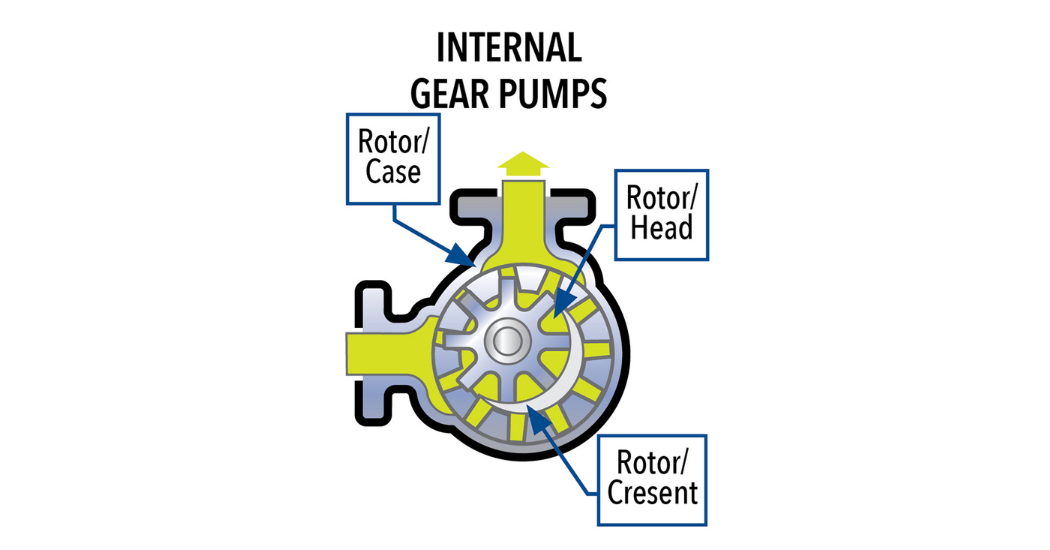 A similar principle is used in the internal configuration, but with two interlocking gears of different sizes. The smaller gear rotates within the larger gear, which has cavities instead of protruding teeth. An idler pin and a bushing attached to the pump casing keep the smaller gear, also known as the idler, in an off-center position, allowing it to interlock with the external gear’s cavities. A fixed, crescent-shaped spacer serves as a seal between the pump’s ports and fills the void from the smaller gear’s off-center position.

Consisting of few moving parts, gear pumps deliver a constant amount of liquid with each revolution of their gears, with their tight clearances and rotational speed preventing slippage during operation. Because the gears are rigid, these pumps create a smooth, pulse-free flow, while also fully capable of handling high-pumping pressures, a necessary trait when handling high-viscosity fluids. 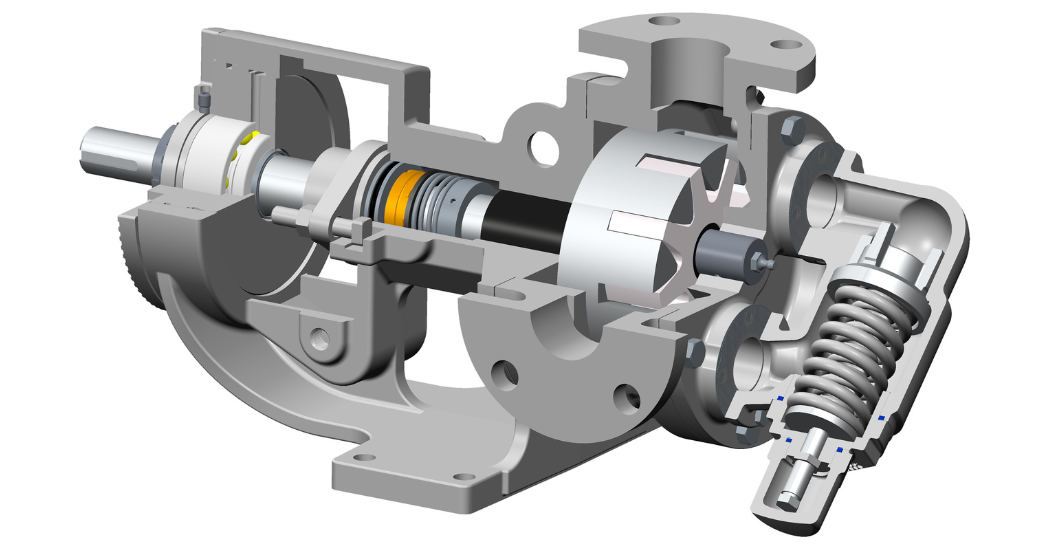 When looking closer at the advantages of gear pumps over similar pump technologies, it’s best to start internally. Gear pumps don’t have many moving parts regardless of configuration. In the external gear setup, two gears mesh to process liquid. Separate shafts support those two gears, which serve as the primary components of the pump. Internal gear pumps consist of a rotor (larger gear) and an idler (smaller gear), as well as an idler pin, bushing and a crescent-shaped partition.

In either setup, the number of components is minimal, meaning operators don’t have to worry about having a massive stockpile of extra components on hand in case of failure. Having fewer components also means not having to worry about so many moving parts breaking down. Whether external or internal, both gear pump variations don’t require constant shutdowns to replace different components with varying lifecycles.

When it comes to a shutdown for the sake of maintenance, gear pump operators only have a few components to evaluate and service. This speeds up and simplifies the maintenance process, giving operators more time to focus on other tasks instead of dedicating too much time to an array of moving parts with different service requirements.

Should a component, such as a gear, fail, operators only have to open the pump and replace the part and put it back online. This is a less tedious procedure compared with other pumping technologies. Additionally, operators can service most gear pumps without removing them from the base, making it easier to service and put back online. 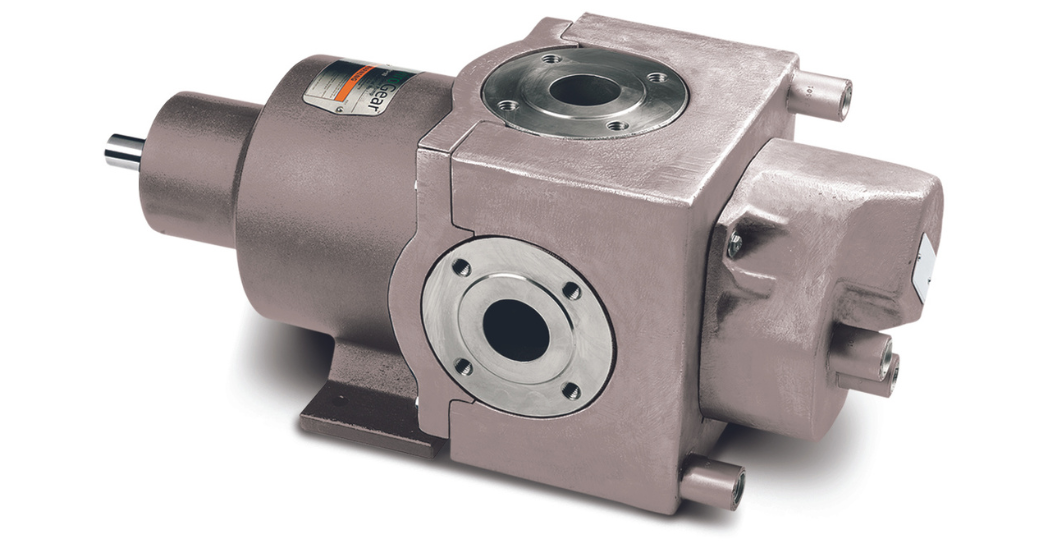 When it comes to handling liquids of varying viscosities, tight internal clearances become essential to the success of the pump. Gear pumps are the kings of tight internal clearances, which makes sense given their composition. Once again, internal or external configurations create close tolerances and suction due to their design. Meshing gears don’t leave any room for slippage because of the tight fit.

In gear pumps, the tightest clearances are found in the rotor/case, rotor/head and rotor/crescent mesh. Not only do the properly selected clearances bode well general liquids but also aggressive varieties and dissolved solids. Examples of these include food-based products, paints and coatings, sealants, adhesives, epoxy resins, rubbers and detergents.

Some products, however, can cause major damage to pumping technology. One such substance is asphalt, which can range from a solid to a liquid depending on the temperature and has several fluid characteristics. Asphalt also comes in several variations, which include hot-mix asphalt, emulsified asphalt and filled asphalt.

Hot-mix asphalt can vary in viscosity based on temperature and contains a blend of high-quality aggregates, polymers and liquid asphalt cement. Emulsified asphalt is made from a mixture of asphalt cement, water and a surfactant (emulsifying agent), which makes it susceptible to shearing. Filled asphalt is highly abrasive because it contains limestone and other particle concentrations of 60% to 70%.

While many pumps would fail at handling asphalt and its variations, gear pumps have a robust nature and tight internal clearances that aid in processing it. Gear pumps, though, require a break-in period to handle asphalt. After that, gear pumps can handle asphalt without damaging its components. 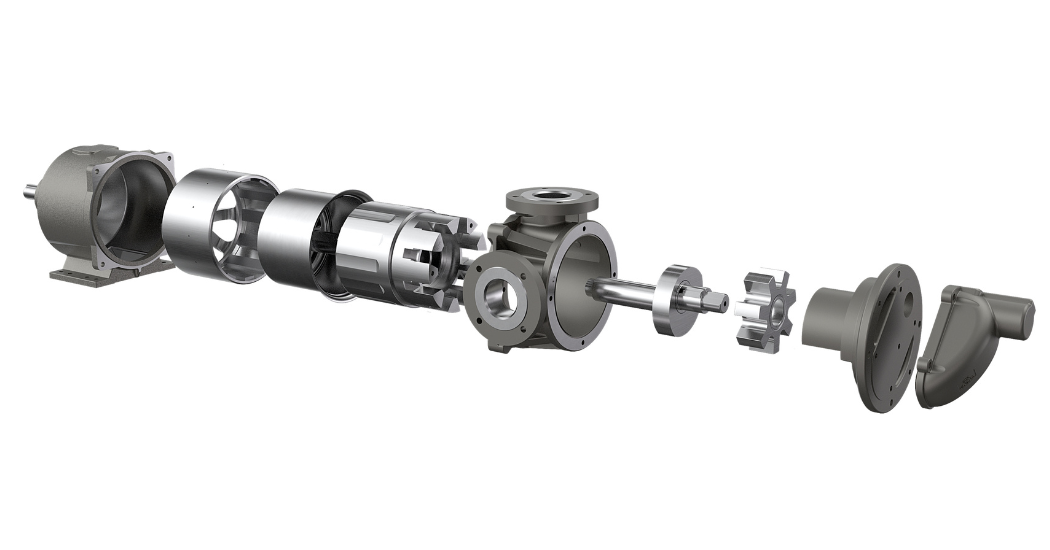 When it comes to highly corrosive fluids, many operators turn to internal gear pumps because they can be constructed to better handle them. Their design already provides an advantage, as discussed with the tight clearances. While gear pumps typically are made from stainless steel or cast iron, they are not limited to these materials.

When handling highly abrasive fluids, gear pumps can be designed using composites or alloys that allow them to process corrosive liquids, such as sulfuric acid and sodium hydroxide. Carbon steel is another option that provides the proper strength to handle aggressive liquids.

Another option to reduce costs, but not sacrifice performance is ductile iron. Using this in gear pumps provides the same performance as steel without the costs associated with it. This is especially helpful when costs are a concern and an operator requires larger gears pumps for their application.

Gear pumps thrive under varying flow rates, allowing operators to place them in multiple applications with different demands. While some pumps need higher pressures for proper functionality or back pressure to avoid flow instability, gear pumps can function well under different flow conditions.

Being able to operate at varying flows means gear pumps don’t suffer from the perils of constant high-flow pressures. Operators can push high flows and scale them back, depending on the application. The flow variation means gear pumps won’t be susceptible to accelerated wear-and-tear on the pump internals from consistent high flows. The varying flows will allow the gear pump to have better longevity. 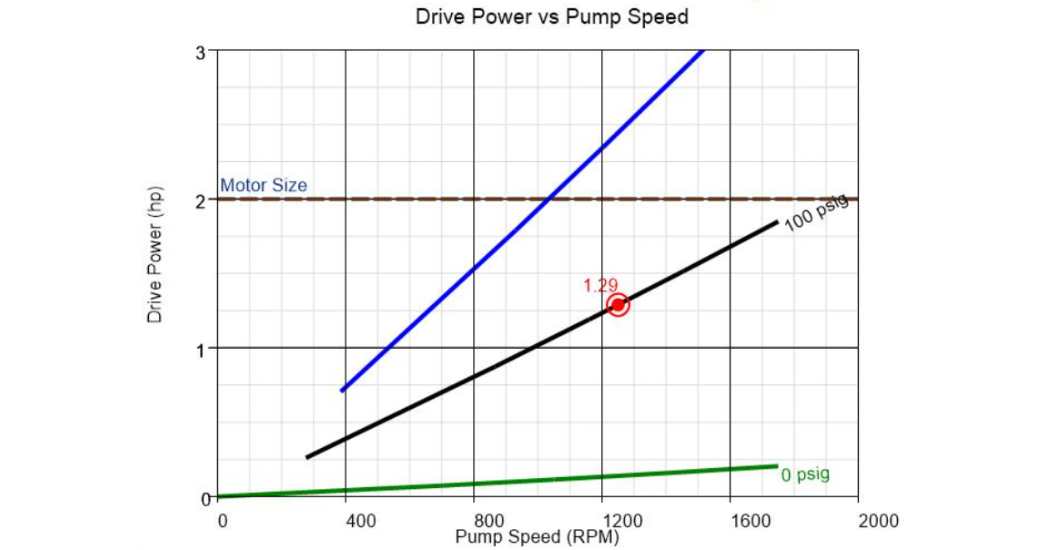 Being able to handle a wide temperature range is imperative to pumping technology if an operator needs it for a variety of applications with different internal and external conditions. Gear pumps perform exceptionally well in nearly all temperature conditions due to having a wide range of tolerances.

Gear pumps can successfully operate in temperatures as low as -112°F (-80°C) and process fluids with temperatures as high as 800°F (425°C). Having this type of flexibility allows gear pumps to accept several liquids of varying temperatures –from soaps and surfactants to asphalts and adhesives–while also operating in environments with extreme weather fluctuations. That means that gear pumps can operate just as effectively with these fluids in the northern-most regions of Canada to the equator regions of South America.

Additionally, gear pumps are designed to accept jacketing across most of its surface area, a key feature that allows this technology to retain heat for substances that require it, such as asphalt. Operators can jacket up to 70%to 80% of the gear pump’s surface area, allowing the apparatus to retain heat effectively. This means most of the gear pumps will keep hot liquids at the proper temperature without the risk of solids forming due to cold spots. 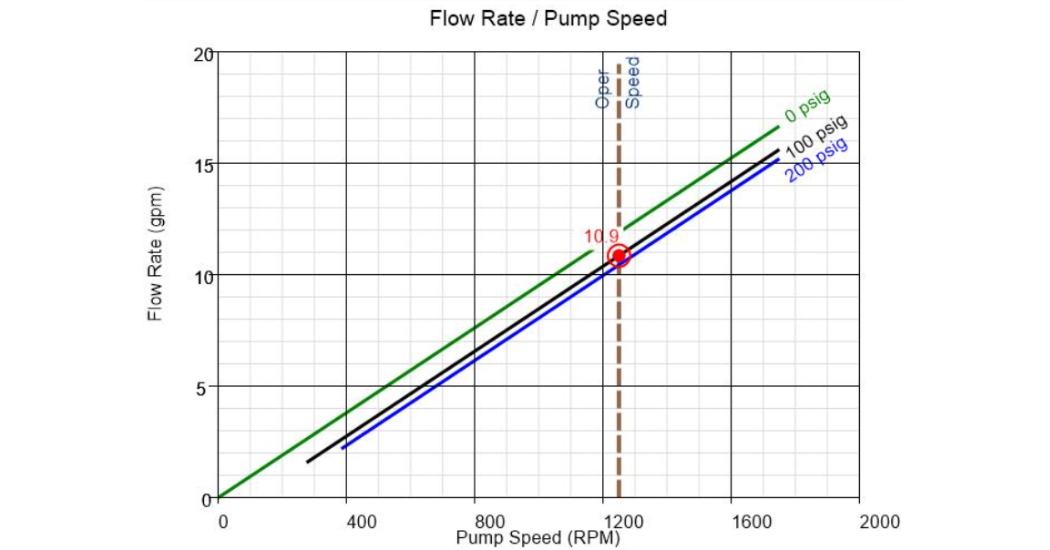 Possibilities with all viscosities

Some pump technologies are limited when it comes to the thickness or thin nature of the fluid. Gear pumps, however, can process a vast range of fluid viscosities. The interlocking gears can accept fluids as low as 1 cP or as high as 1,000,000 cP.

Overall, gear pumps stand out for their versatility. This technology’s ability to accept a wide fluid range with varying viscosities and temperatures makes gear pumps a sound choice when designating them for critical fluid-handing applications. Gear pumps function as an all-purpose technology, especially because of the range of fluids they can process and the materials that can be used to craft them. Even fluids that would damage the internal composition of other pumping technologies can be properly processed through a gear pump.

Having fewer components simplifies the maintenance process and ensures that operators won’t have to worry about multiple moving parts failing over a set period of time. The lack of these concerns allows operators to focus on the task at hand. With gear pumps in their operation, those tasks can include processing a range of fluids for a wide variety of applications without worrying about the pump’s functionality or integrity, be it in that moment or over time. 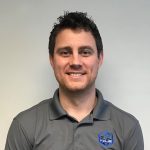 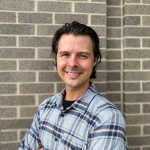 Michael Coburn is the Product Manager for EnviroGear®. He can be reached at Michael.Coburn@psgdover.com. Geoff VanLeeuwen, P.E., is a Product Management Director for Blackmer® and PSG®. He can be reached at Geoff.vanleeuwen@psgdover.com. EnviroGear® is a leading brand of internal gear pumps and a product brand of PSG®, a Dover company, Oakbrook Terrace, IL, USA. PSG is comprised of several leading brands, including Abaque™,All-Flo, Almatec®, Blackmer®, Ebsray®, em-tec, EnviroGear®, Griswold®, Hydro, Malema, Mouvex®, Neptune™, Quantex™, Quattroflow™, RedScrew™and Wilden®. For more information on EnviroGearor PSG, please go to envirogearpump.com or psgdover.com.

All-Flo™, a brand of PSG®, a Dover company, and a leading provider of air-operated double-diaphragm (AODD) pumps and accessories, has…