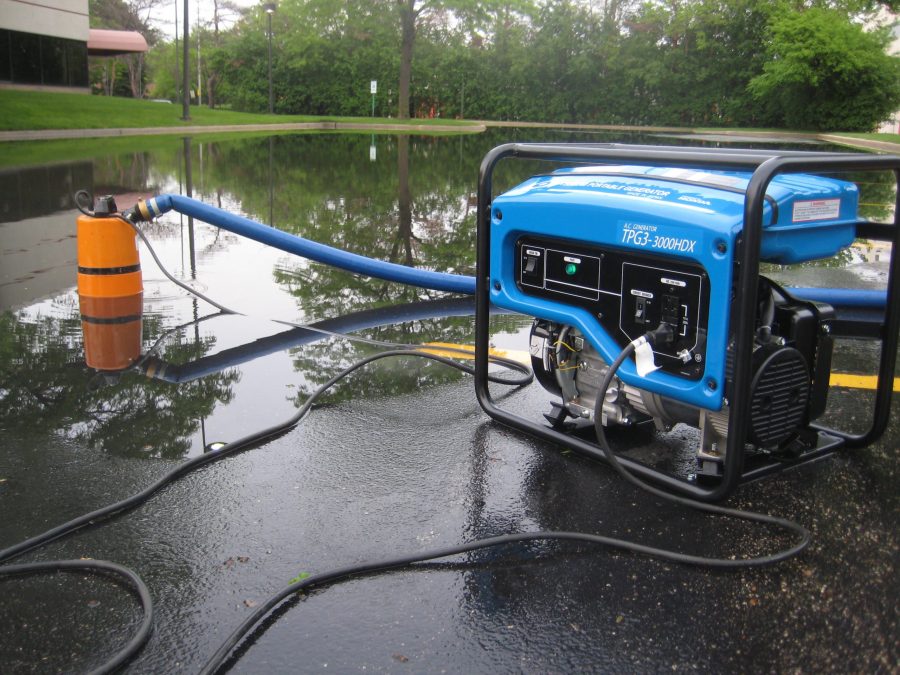 As we’ve all learned the hard way from storms like Sandy, Harvey, Maria, and Katrina, among others, the surge from a named hurricane can flood basements in a flash, wipe out electrical power sources, and bury entire communities underwater. Before the power can be restored so that a community can begin to recover and rebuild, pump companies show up to get the water out.

Generally, there is some warning that a hurricane or tropical depression is threatening, giving pump companies time to prepare for possible equipment that may be needed after it hits.

However, logistically they must react well in advance to coordinate a plan to get the necessary pumps, hoses, generators, and other equipment in place and near the site of the projected landfall.

“We’ve been doing this for many years, so we keep a close eye on these storms,” said Glenn Wieczorek, Managing Director of Tsurumi (America), Inc. “We work with our shipping companies to give us a head’s up as to logistics that you may not think about, like when they will discontinue shipping into an area that may be affected by a natural disaster.” 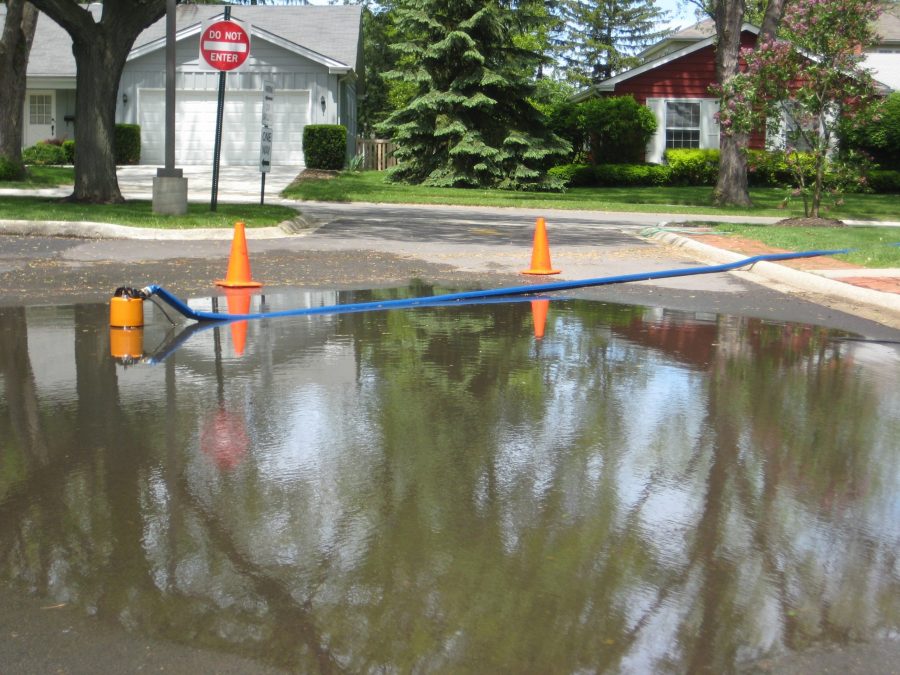 Creating a Plan of Action During the Hurricane Threat

Things like fallen trees, excessive debris, standing water, and closed roads are all obstacles that could hinder a pump company’s ability to deliver critical equipment to an area hit by a severe storm. That’s why careful planning and coordination must happen in advance.

Shipping options could be stopped a week before a storm hits because there is a possibility that the trucks will get into the disaster zone and not be able to return back out of it. Fuel becomes a high demand commodity, and roads may close—additional obstacles that complicate the process of disaster relief.

“We try to work with our shippers early to ensure communication,” Wieczorek explained. “At all times, we have our inventory distributed throughout the United States in third-party warehouses. If a storm threatens a certain area, we need to be ready. If a product isn’t there before the storm hits you may not be able to get it there after the storm.” 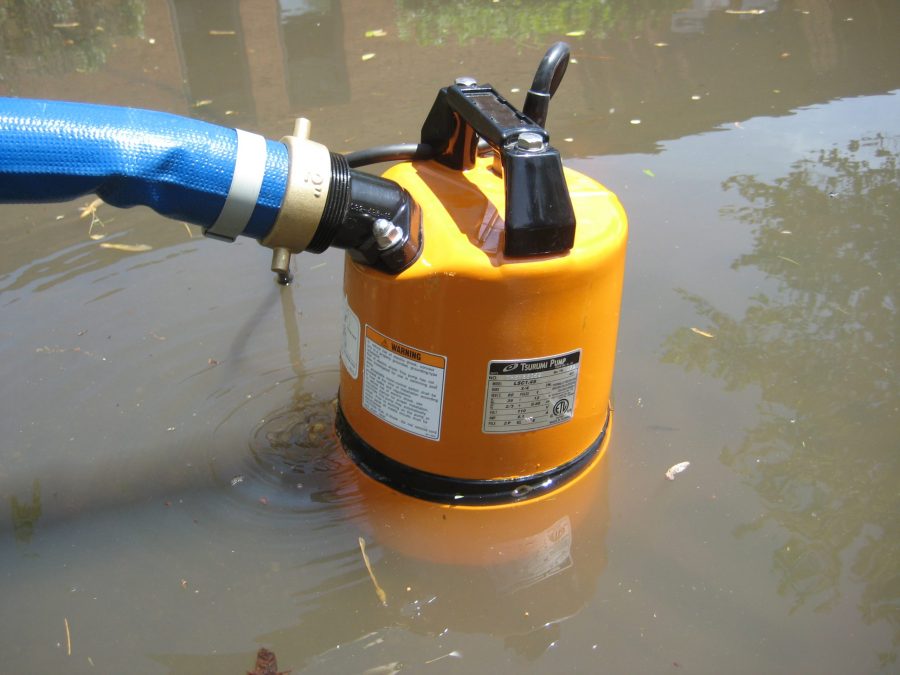 Superstorm Sandy was the deadliest, most destructive storm of the 2012 Atlantic Hurricane Season. Several pump companies deployed equipment to the flooded areas immediately after the storm made landfall near Atlantic City, N.J., on Oct. 29, 2012 to help the area recover from the destruction.

Pump companies were still working at maximum capacity in the area several weeks later to remove the water and restore the damage from the storm that claimed the lives of more than 120 people and caused an estimated $70 billion in property damage and economic losses.

Until Hurricanes Harvey and Maria swept through the Gulf Coast in 2017, Sandy was the second most expensive hurricane in U.S. history.

“When Sandy threatened the Northeastern shore, we had a very strong distributor there, so we shipped pumps and generators in before the storm hit,” Wieczorek explained. “After the storm, we could have sold anything we had there because the demand was so high for equipment. We could have sold truckloads of hoses because everyone needed items like that.”

Lessons learned from previous disaster events helped pump companies like Tsurumi prepare for the recent threat of Hurricane Laura, which made landfall near the district of Cameron in Louisiana as a Category 4 Hurricane on August 27, 2020. At landfall, Laura was the strongest hurricane to strike the state since 1856 with 150-mph winds and a 9- to-12-foot storm surge. Laura is responsible for at least 24 deaths—many of them caused by the improper use of portable generators, according to NBC News reports.

“In the case of Laura, we have a warehouse in Dallas that also has a facility in Houston,” Wieczorek explained. “This was the best course of action to get equipment close to the affected area without getting right in the middle of it. When Harvey hit in Houston, we shipped equipment to Dallas just in case they couldn’t get access within the Houston area. Each threat of disaster is different. We must look at the forecast, how it is approaching, and then make a decision on how to distribute the equipment needed for that situation.”

While the water damage from Laura was fortunately not as severe as anticipated, Louisiana’s Governor, Jon Bell Edwards, said Laura was even more powerful than Hurricane Katrina, the 2005 storm that devastated New Orleans killing more than 1,800 people. However, the surge did not create as much standing water.

Ahead of Hurricane Laura’s arrival, more than 420,000 Texas residents were ordered to leave, while an additional 200,000 were told to evacuate Calcasieu Parish in southwestern Louisiana. The evacuations were complicated by the Covid-19 pandemic. While the communities in the path of Laura were preparing, so were the pump companies.

In advance of any major storm event, huge trash pumps, submersible electric pumps, diesel-driven pumps, generators, and other equipment is deployed by dozens of pump companies.

MWI Pumps deployed seven 60” permanent pumps to Lake Charles—each with the capacity to pump 112,000 GPM as well as pumps pumping a total of 2-2.5 million GPM in the affected areas of SW Louisiana and East Texas.

Larger municipalities and power plants in the hurricane belt, such as those in Florida, Louisiana and Texas, make plans for equipment far in advance of hurricane season.

“In Houston, for example, there are a lot of petrochemical plants,” Wieczorek said. “Companies like this may have hurricane contracts with equipment companies that they negotiate long before hurricane season begins. They may have a fleet of rental pumps on standby, just in case. They must be back online as quickly as possible. What they end up not needing, they may sometimes rent equipment like smaller generators to homeowners in the area.” 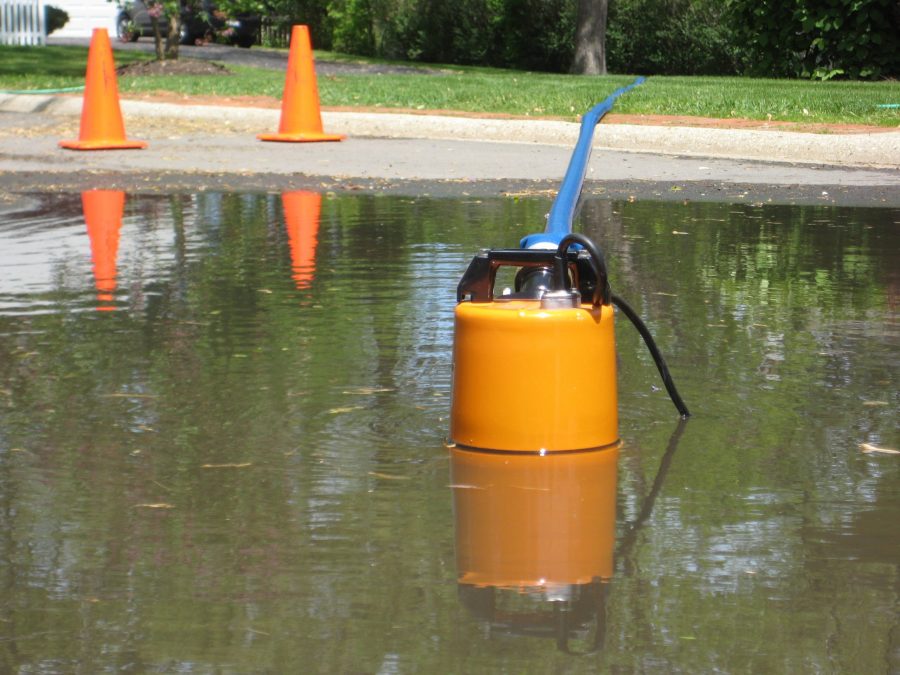 The logistics of preparing for a natural disaster is sometimes a guessing game for pump companies as storms may shift and conditions like power outages and fallen debris can often get in the way of the delivery of crucial equipment.

“If a storm is headed to Houston, we may ship the equipment to Dallas,” Wieczorek said. “We try to get the equipment close, but perhaps not in the epicenter of where it will be needed. We have to consider that the equipment can also get damaged during the storm.”

In Florida, Tsurumi has warehouses in the Orlando area. “We look for inland sites to store the equipment,” he explained. “Therefore, the equipment in Orlando could later be sent to the east coast or the west coast, depending on where the storm hits. We have to make these decisions just before the storm hits. We are not infallible. Sometimes the storm shifts and goes to a different place.”

The goal is to try to get the equipment to the area a few days prior to when the storm should hit.

“We are at the mercy of the shipping companies,” Wieczorek further explained. “It’s all a logistics puzzle. Sometimes the equipment doesn’t arrive until after the storm. Once it gets in the hands of the shippers we are at the mercy of their abilities. We just have to be sure to communicate with them. We can’t promise our customers one thing and have something else happen. Also, the people on the ground in the area send us weather updates and other information that helps to facilitate.”

For hurricanes, Tsurumi generally deploys electric submersible pumps and contractor-grade engine-driven pumps and some trash pumps and larger industrial dewatering pumps. Because of excessive flooding, there will be a lot of solids in the water being pumped so this must also be considered.

While Laura delivered a heavy punch, fortunately the water damage was not as severe as previous hurricanes, like Katrina.

“Near Lake Charles there was standing water, but not as bad as Katrina,” Wieczorek said. “Of course, there are some houses on stilts with water up to the house. That kind of water will recede quickly as compared with some storms. There is a lot of structural damage caused by the standing water. Generally, we send a couple truckloads of pumps and equipment to a natural event like this.” 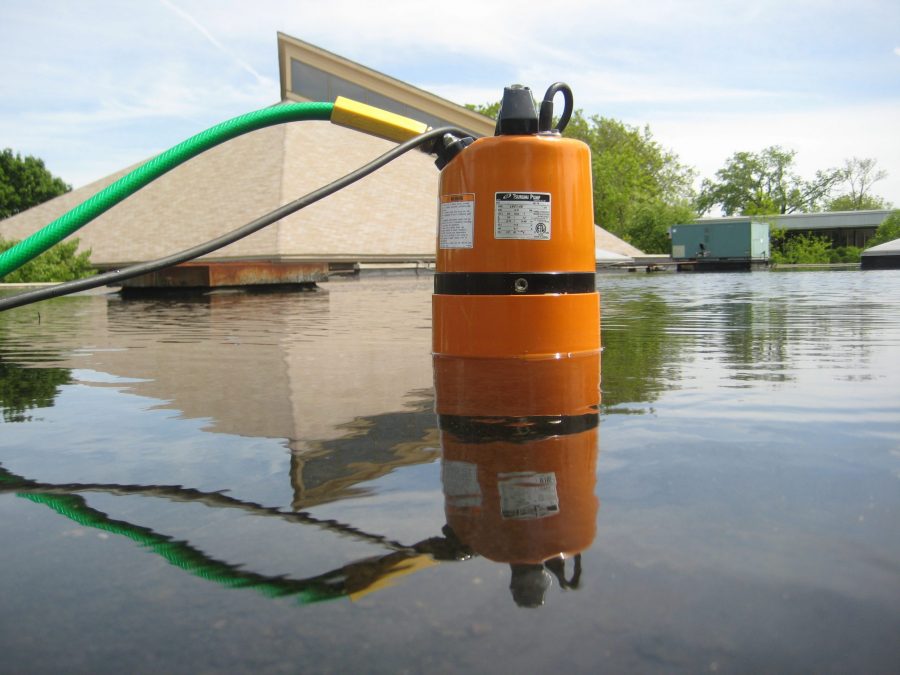 Katie Mehnert, CEO of Pink Petro and Experience Energy, and Ethan Bellamy, Managing Director at East Daley Capital organized the Hurricane Laura Energy Industry Relief Fund. Together, the “EFT” and ALLY community aim to raise $100,000. All funds will be distributed to a Texas 501c3 for granting immediate needs for those in need on the ground.

If you’re safe and dry, remember that others aren’t. Texas and Louisiana are home for many of the hard working women and men who serve our nation’s energy needs.  And their families and communities need us now more than ever.

Michelle Segrest is President of Navigate Content, Inc., a full-service content creation firm. She has been a journalist for more than three decades and specializes in covering the people and processes that make a difference in the industrial processing industries. Contact her at michelle@navigatecontent.com 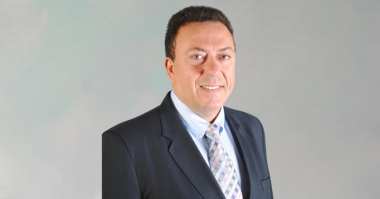 This week’s Industry Person of the Week is Adonis Layyous, VP of Sales at Pye-Barker Engineered Solutions. Q: How did you…

Schlumberger and NOV announced a collaboration to accelerate automated drilling solutions adoption by oil and gas operators and drilling contractors. The agreement will enable…