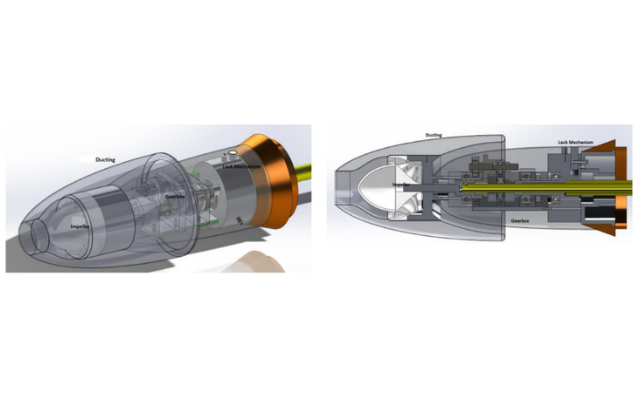 The International Submarine Races (ISR) is a competition in which teams race “wet” submarines. A “wet” submarine is an internally flooded, fully enclosed, vehicle in which the pilot(s) must breathe from a SCUBA apparatus [1]. The racecourse is a 100 yard straight sprint. The submarines compete in four categories: 1 and 2 person propeller, and 1 and 2 person non-propeller. A propeller system is defined as a water-coupled device with radiating blades that create thrust when spinning. A non-propeller system is defined as any other water-coupled device that creates a thrust when operated. A bottom crawling vehicle is not a water-coupled device [1]. The University of Michigan Human Powered Submarine Team (HPS) traditionally builds single person propeller driven submarines [1].

Submarines predominantly use propellers, even the standard screw propeller can produce high efficiency on the order of 80 percent. [2] However, jet propulsion is also used where water is drawn in and thrust out near the stern. This leads to no moving parts outside the main hull, so jet propulsion tends to be used in shallow water applications. Since an impeller is used to pump the water, the overall efficiency is less than that of a propeller system because of friction loss from the inner wall ducts. [3] Propellers and jet propulsion are the two main systems in use by submarines today. Magnetohydrodynamic (MHD) systems are being researched but are not in commercial use. One of the main problems is the relative efficiency compared to other forms of propulsion. The efficiency of a MHD system is proportional to the magnetic flux intensity, so very powerful magnets are needed. [4] To find other comparable models to what we are trying to achieve, other submarines in the human powered submarine competition and other underwater systems need to also be studied.