How NOT to Use a Rubber Expansion Joint

Home » How NOT to Use a Rubber Expansion Joint
Fluid Sealing Association January 19, 2022 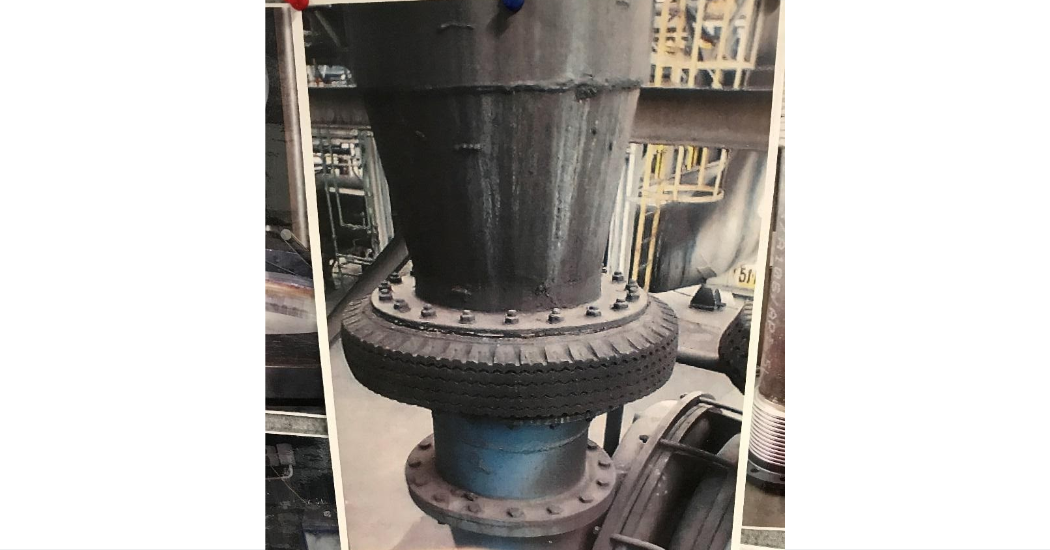 How NOT to Use a Rubber Expansion Joint

What’s wrong with this picture?

Rubber expansion joints are likely the least understood and most abused component in a piping system. They are flexible, stretchy, bendy and easily forced into lots of places despite what the installation instructions say. Most of the time, rubber joints are merely an afterthought in multimillion-dollar piping systems. Until things go awry.

The rubber joint is unmatched for vibration isolation. Properly installed, a rubber joint will greatly reduce equipment nozzle loads. Its resilience allows it to be installed in many different systems under a huge range of temperatures, pressures and media. “What could possibly go wrong?”, you may wonder.

Blame Mr. Murphy if you want, blame human nature, the Fates or the alignment of the planets. The reality of most failures is more straightforward. Most of the time, it is installation. More specifically, not following the manufacturer’s instructions. What follows is a rogue’s gallery of photos illustrating the ugly aftermath of ignored installation instructions and unforeseen operating conditions. Learn these lessons well so your piping system does not become a subject of another article. 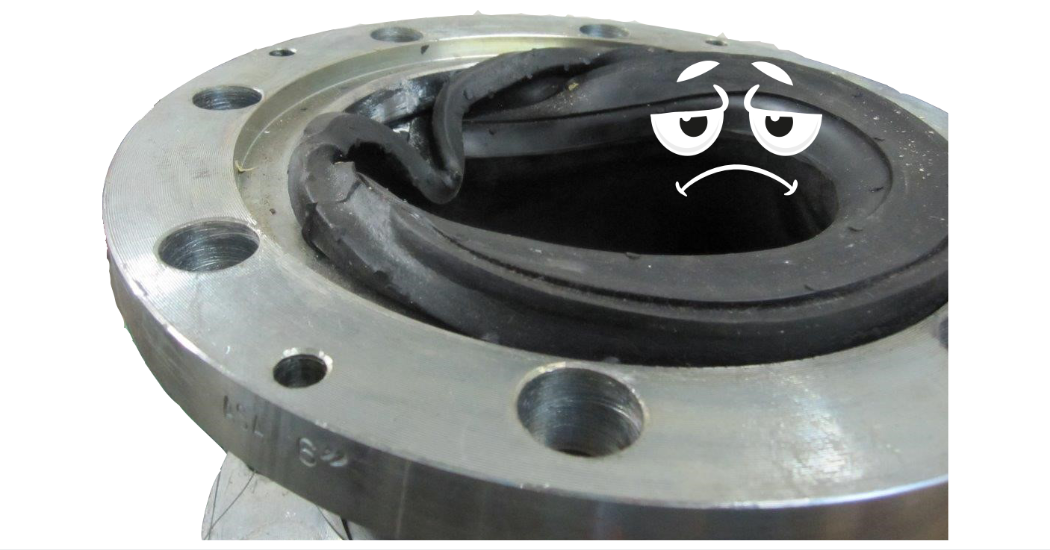 Sometimes flexibility is a disadvantage. Why? Because it’s easy to compress a joint into a space that’s too small, which is exactly the problem here. The bead was damaged as the joint was forced into a gap between flanges, resulting in a seal failure. Spherical expansion joints rely on this bead to form a seal between flanges. If the bead is damaged, the building engineer will curse your name for eternity. Don’t violate the face-to-face dimensions of an expansion joint. 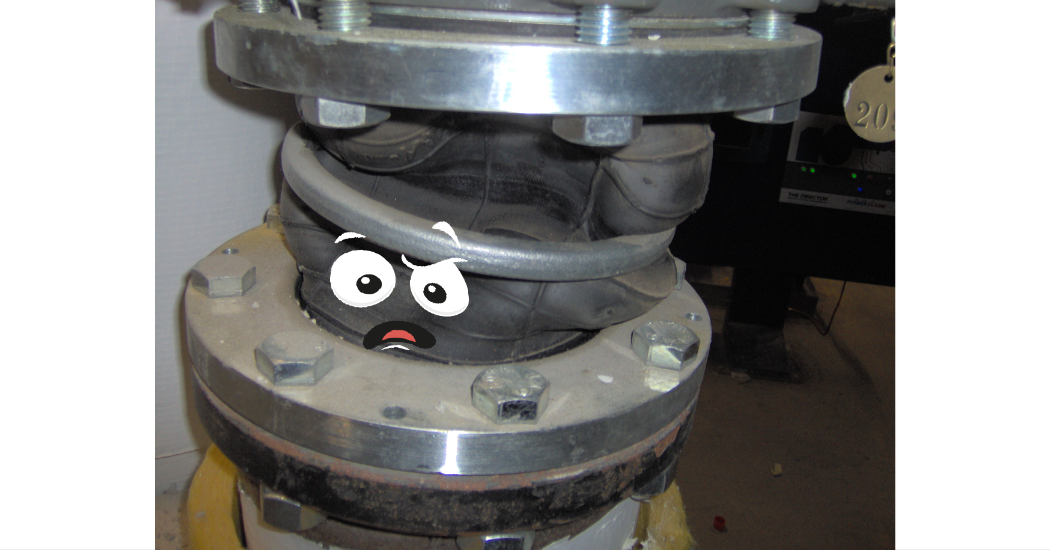 Pipes misaligned? Think a bendy stretchy rubber joint will fix the situation? Better think again. This joint was installed between two misaligned flanges. A typical scenario may look like this:

Don’t turn your pump room into a water park – or even worse, a sewage tank. Align those flanges before installing expansion joints. 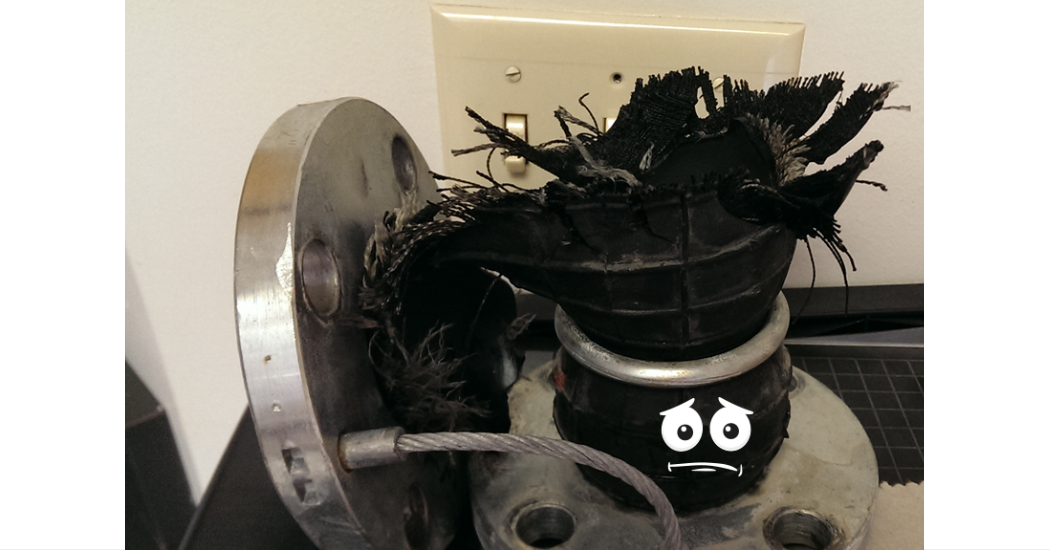 Did you know your water pumps can generate steam? This operator didn’t. In this unfortunate scenario the operator closed the pump isolation valves with the pump operating, dead-heading the pump. This situation is ok for a short duration, but eventually all that mechanical energy added to the water has to go somewhere. It went into heat. The water contained in the pump and pipe up to the isolation valves had so much energy added that it flashed to steam. The expansion joint was the first component to fail, which was fortunate for the pump. The temperatures and pressures exceeded the rubber performance limits and the joint failed, nobly sacrificing itself for the greater good of the pump and piping. 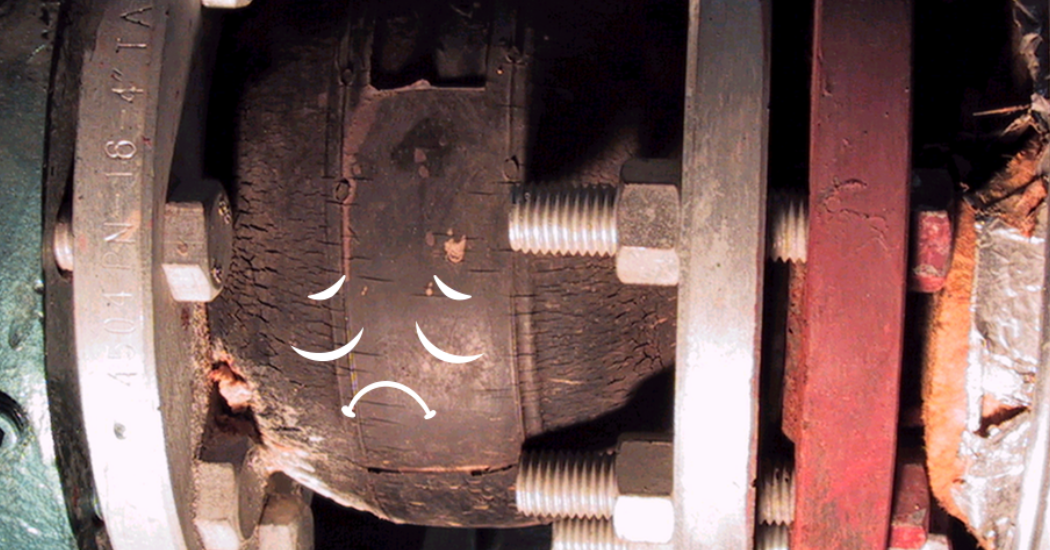 The previous example showed both temperatures and pressures out of limits. If only the temperature exceeds the rubber rating, the joint will still fail but it won’t be quite as spectacular. This photo illustrates a hard-boiled expansion joint. Rubber turns hard and brittle when exposed to temperatures exceeding the published limits. It won’t be immediate, but over time the rubber will essentially transform into something resembling plastic. And it will no longer move. This is bad. 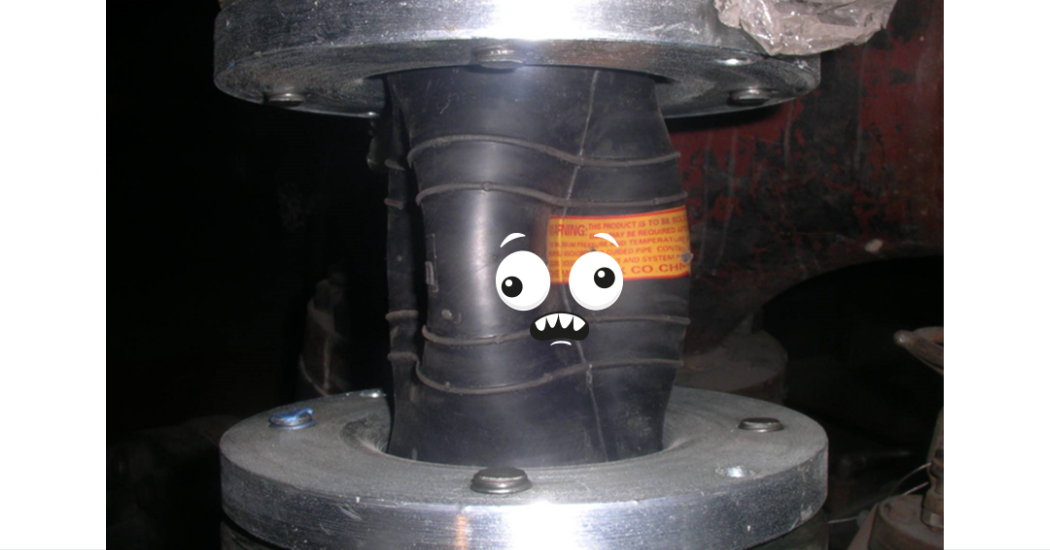 Vacuum sucks. Literally. A vacuum is any point in the pipe where the pressure drops below atmospheric pressure (14.7 psia/29.92” Hg). There are some expansion joints that can deal with a partial vacuum, and some that can’t. This unfortunate joint can’t. This poor spherical joint was subjected to a vacuum and over-extended itself. In building systems, expansion joints can be exposed to unintentional vacuum conditions when a riser is drained and not vented, or if a pump inlet pressure is below atmospheric pressure. Always check those operating conditions, then follow the manufacturer’s directions for installing your joints for the conditions! 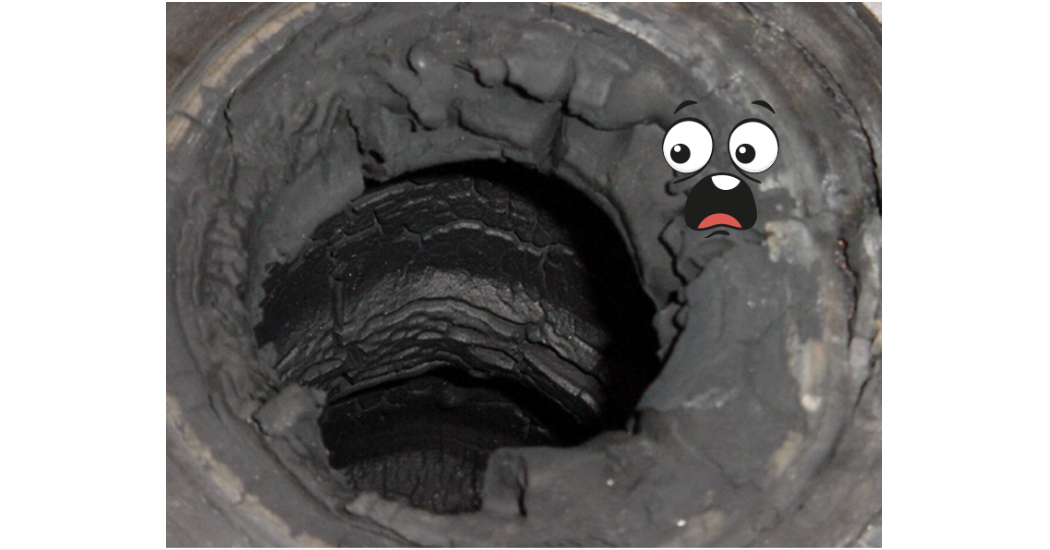 Material compatibility issue? When your expansion joint turns to goo, that’s a very good first guess. This is the most unfortunate aftermath of the media reacting with the rubber. This situation could have been avoided by selecting a different elastomer. 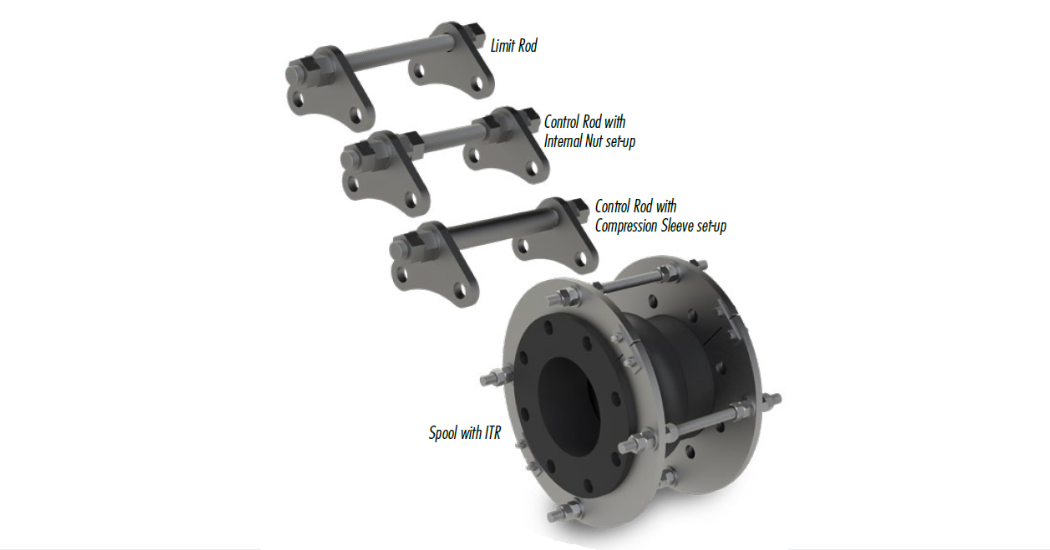 Absent from these photos is the expansion joint’s trusty sidekick, the control rods. Control rods are not necessarily required for every installation, but they are always a good idea. Consider control rods as cheap insurance, preventing expansion joints from over-extending or over-compressing. A control rod assembly will avoid problems related to excessive movement.

One more item the author has encountered at EVERY site where a rubber joint failed is loose bolts. This is no exaggeration. EVERY failure site had expansion joints with bolts that could be removed without tools – even on joints that were not involved in the failure. Although manufacturers have different bolt tightening requirements, the one common thread (bad pun intended) is that bolts must be re-tightened after the initial installation.

What do all these failures have in common? It all boils down to human error. Each incident could have been avoided by following the manufacturer’s instructions and effectively communicating the application requirements prior to ordering the expansion joint. Convincing people to follow instructions can be a futile effort. Communicating application requirements, by contrast, is easy. Appendix L, p.49, of the Piping Expansion Joint Handbook has one single information sheet that can eliminate many of the problems shown in this article.

The Fluid Sealing Association’s Piping Expansion Joint Handbook and KnowledgeBase contain a wealth of information, so consult these resources early and often during the project.

The requirements of HVAC and plumbing piping systems can be very different from the process industry. HVAC systems use piping… 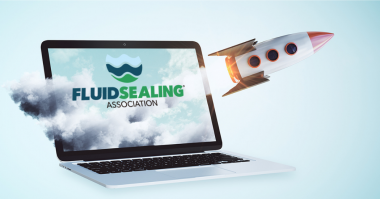 The Fluid Sealing Association (FSA) has announced the launch of their newly updated website at www.fluidsealing.com. The website has been… 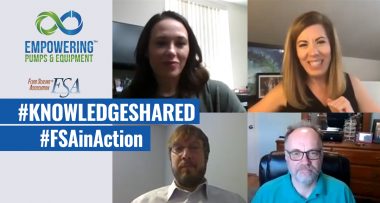