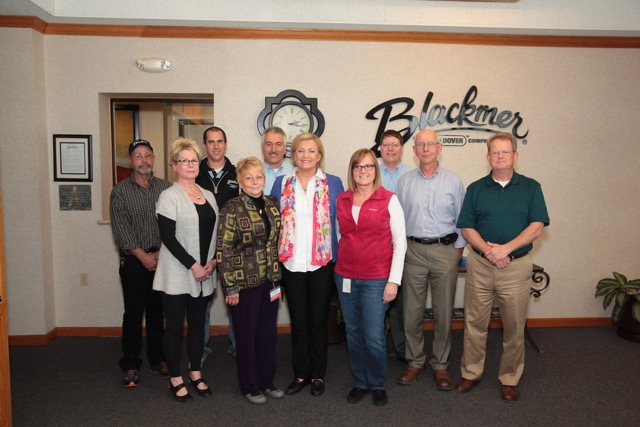 Blackmer®, part of PSG®, a Dover company, and a global leader in positive displacement and centrifugal pump, and reciprocating compressor technologies, is proud of its relationship with the United States Military, which began in 1914 when it became an official equipment supplier to the Armed Forces.

One of the more significant contracts Blackmer has earned was awarded in 2007 when the U.S. Navy selected the company to supply sliding vane pumps for use on the USS Gerald R. Ford (CVN-78), which would be the lead ship in a new class of supercarriers used for crisis response and early decisive striking power in major combat operations. The USS Gerald R. Ford was christened in November 2013 and will be officially commissioned later this year with its first deployment set for 2019.

To say that Gerald R. Ford is linked to Grand Rapids – Blackmer’s home since 1925 – is like saying that he once lived in a pretty historic house in Washington, DC. He was raised in the Grand Rapids area and represented its congressional district from 1949-73 in the U.S. House of Representatives before serving as the 38th President of the United States from 1974-77. 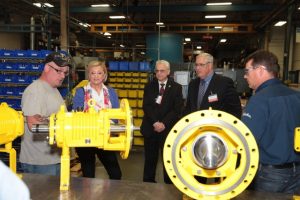 It is understandable, then, that Blackmer and its employees (10% of whom are military veterans) take special pride in outfitting the USS Gerald R. Ford. Blackmer’s commitment to the USS Gerald R. Ford and the well being of its crew goes far beyond supplying the carrier with pumps. Working with the USS Gerald R. Ford Commissioning Committee, the Naval League and the Gerald R. Ford Presidential Foundation Library & Museum in Grand Rapids, Blackmer’s Cultural Team held a fundraiser and raffle on June 16, with all of the proceeds benefitting the carrier’s crew. Among the items on the carrier for which the funds will be used include a Learning Resource Center/Training, Ship’s Chapel, Crew Library, Ship’s Tribute Room, Ceremonial Quarterdeck, Commanding Officer’s Import Cabin Complex and enhancements to the Foodservice Division.

For a modest donation, Blackmer employees were treated to an All-American lunch of hot dogs, baked beans, potato salad, cole slaw, potato chips and apple pie. Raffle tickets were sold with prizes including two VIP seats to the Commissioning ceremony in Virginia later this year, tickets to Grand Rapids Whitecaps baseball games, Detroit Red Wings and Tigers memorabilia, hats, shirts, pens and other items emblazoned with the CVN-78 logo, gift cards from local merchants and two posters of the USS Gerald R. Ford signed by Susan Ford Bales. A special appearance was made by Vice Admiral David Architzel USN (Ret), who was the driving force behind many of the technological advancements that are being incorporated on the carrier.

Speaking of Susan Ford Bales, the president’s daughter, who was in Grand Rapids for another fundraiser last month, learned of Blackmer’s involvement in the outfitting of CVN-78 and was treated to a tour of the company’s facility on May 16.

“This started as a simple grassroots donation request, but then it grew into a fun lunch event, which then grew even bigger as the many sponsors felt a kinship for our cause. The food kept improving and the raffle kept growing,” said Ivars Bergs, Manager, Military and Marine Group for PSG Grand Rapids, and one of the main organizers of the various activities. “This evolved into something much bigger than we thought it was going to be. Our people were really looking forward to it and plenty of goodwill has been generated.”

Blackmer® is the leading global provider of innovative and high-quality rotary vane and centrifugal pump, and reciprocating compressor technologies for the transfer of liquids and gasses. For more than a century, the Blackmer name has stood for unparalleled product performance, superior services and support, well-timed innovation and a commitment to total customer satisfaction. Supported by a worldwide network of distributors and original equipment manufacturers, Blackmer pumps and compressors are used in a multitude of applications in the Process, Energy and Military & Marine markets. Blackmer—headquartered in Grand Rapids, Michigan, USA—is part of PSG®, a Dover company

All-Flo™, a brand of PSG®, a Dover company, and a leading provider of air-operated double-diaphragm (AODD) pumps and accessories, has…