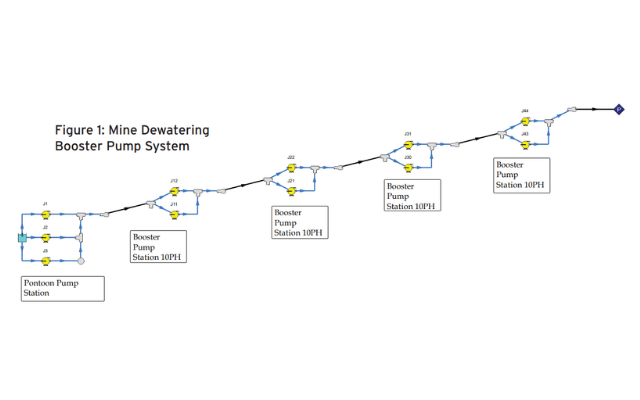 Geoffrey Stone, principal at Blenray Pty Ltd, used AFT Fathom to model a proposed modification to a mine dewatering system in Indonesia. The proposed system consisted of four skid mounted parallel pump sets, lined up in series, and fed from an existing pontoon pump system. The system required a flow capacity of 480L/s (7,600 gpm), over a pipeline distance of 4,300 meters (14,107 ft), and an elevation gain of 400 meters (1,300 ft).

Maintaining an appropriate pump NPSH margin, while using relatively small pipes, was critical to the success of the project. The smaller than usual pipes and skid mounted pump sets were required to accommodate frequent reconfiguring of the pumping system.

The system was modeled in steady state using existing and selected pumps as well as actual pump curves to ensure that the client requirement to use a specific pump was met (Figure 1 above). Pump speeds could be changed in the model to meet the control criteria of suction and discharge pressure and pump NPSHa within the design rating of the PE100.

Hydraulic power was examined and compared to the performance of the diesel unit’s capability driving the pumps. The reduced speed, elevation and constant operation of the diesel motors was a challenge with some pump set locations. This was taken into account in the pump set selection and placement along the mine haul road.

The PE100 properties were contained in an AFT Fathom user generated database using criteria from Australian Standard AS 4130. This enabled selection of various classes before the PN12.5 was chosen.

The model allowed the implementation of a cost-effective solution using materials and equipment that the operators were familiar with.

Blenray Pty Ltd developed standard operating procedures for the system. These procedures and the model were used by software developers to write the code for the pump set & system control. Stone said, “The AFT Fathom software quickly enabled “what if” scenarios to be modeled to determine compliance with the design criteria. The route of the pipeline was changed several times as the project developed. The number of pumps was optimized to suit the criteria.

The solution enabled the mine to use a low cost solution. The model could be provided to an international customer who could run the model using the AFT Fathom viewer. The use of graphical representation in reports was very useful in demonstrating compliance. Presentations were made to the client using the output of AFT Fathom to illustrate how the system was expected to operate.”

The system has been operating successfully for five years. The client requested an investigation into providing more pumps to allow for a revised mine plan at increased depths (Figure 2). The reliability of the system is key to the successful operation of the mine. 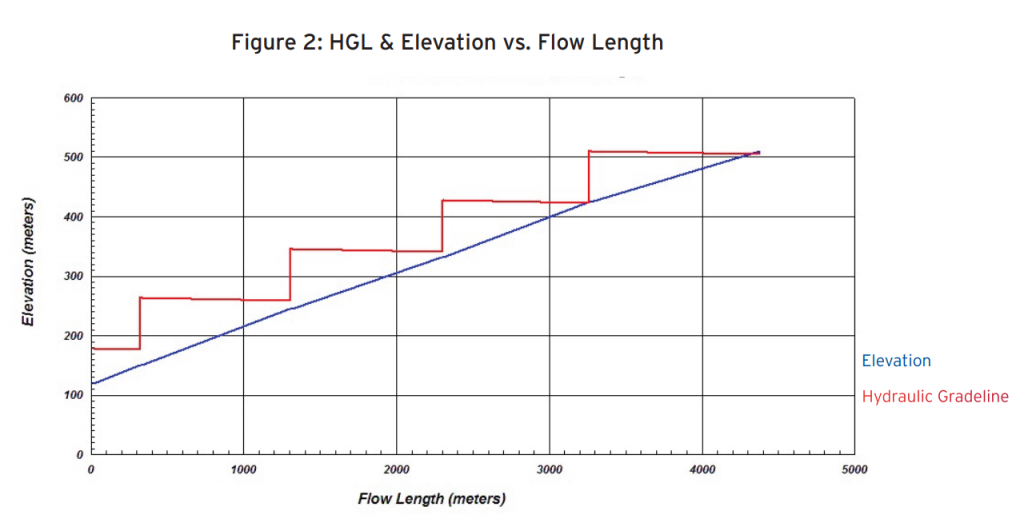 [WEBINAR] How to Ensure a Safe Mining Operation with AFT Arrow

Pipe flow analysis is incredibly important for mining applications in several ways including mine dewatering, ventilation, slurry handling. Sign up for this free webinar on Monday, December 19th from 10:00 AM to 11:00 AM (MST) to learn how to solve issues with these types of applications in the mining industry. 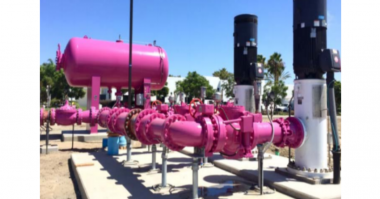 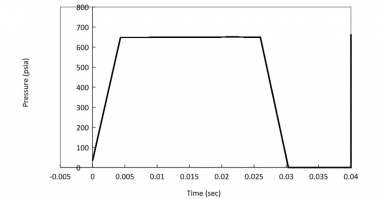