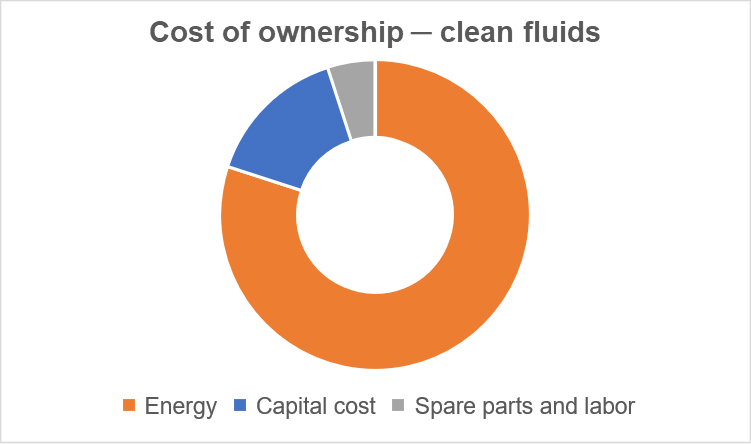 As the total cost of ownership of pumping systems comes under greater focus, Harvinder Bhabra, Head of Segment Fertilizers, Metals, Mining and Chemical Process lndustries at Sulzer, looks at the typical method of calculating the cost and suggests other considerations that should be made to assess, and manage, an accurate figure.

Pumps have been used for the transfer of fluids for centuries, starting from the early Egyptian shadoof and Greek Archimedean screw through to the highly engineered designs we now use. There are many types of pumps in use today, mainly classified between rotodynamic, positive displacement and other special designs. Over time, as industry processes became ever more sophisticated, the specifications for the various pump types demanded innovative pump manufacturing techniques and advanced features to keep pace. Some of these include hydraulic profiling, CAD/CAM, computational fluid dynamics, finite element analysis and 3D printing. Most recent developments come with the advent of the Internet of Things (loT) and the collection of pump operating data and condition monitoring. lnstant visibility of a pump’s performance provides a reduced risk of unplanned downtime caused by a failure.

This article is based primarily on rotodynamic centrifugal pumps, but some elements may also apply to other types of pumps.

Each sector or process has developed general industry- as well as process- or customer-specific specifications to suit its requirements. Regardless of the industry, the transactional purchase and sale of pumping equipment was primarily based on the capital cost of the equipment and availability was the secondary factor, provided there was compliance with the relevant specifications.

However, as processes required increasingly higher throughputs, pump sizes became larger, and the cost of the energy needed to run them became very noticeable. As an example, pumps used for absorber recycle applications in the power industry increased in size as process flow rates went from 2’000 m3/h in the mid-1970s to over 15’000 m3/h in the 2000s, and motor powers increased from ~250 kW to 1’000 kW and upwards.

With the environmental impact of industrial processes coming under intense focus on a global scale and following the Kyoto Climate Summit, some European governments introduced legislation to penalize energy usage and enforce the use of energy-efficient equipment. Furthermore, mandatory energy efficiency regulations are now being introduced in several key countries, including the MEI index in Europe and various others in China, Canada and the USA. 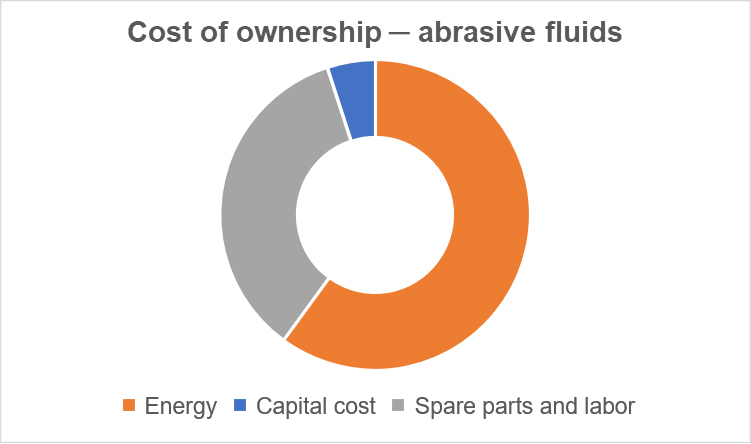 Despite this, by 2050, worldwide energy consumption is expected to be 50% greater than it was in 2018. Pumping systems account for more than 20% of the world’s electrical energy demand, and in certain industrial plant operations, they can be responsible for between 25% and 50% of the site’s total energy usage.

Pump designs further developed into applications where the transported fluids contained solid particles, the wear rates of pump components increased, and another factor started to take prominence – the cost and availability of spare parts. The mining industry was particularly focused on this aspect as pumps were used for increasingly more arduous applications. As a result, materials technology, as well as the hydraulic design, became critical.

This noticeable increase in the costs of energy consumption and spare parts consumption (including warehousing, inventory handling and labor) resulted in pumping equipment being treated as an asset and assessed in terms of the total cost of ownership (TCO) over a given period, such as 1, 3 or 5 years. ln evaluating TCO, three main elements were identified:

Of course, the proportions of these costs in the TCO vary depending on the applications that pumps are used for. Figures 1 and 2 show the difference between an example based on a clean fluid and one based on an abrasive fluid.

While this analysis is a widely used one and covers most major elements of the costs of operating pumps, several other factors should not be overlooked. 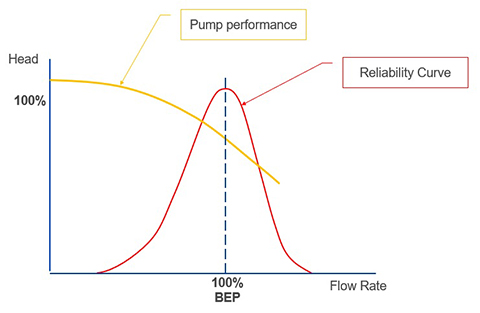 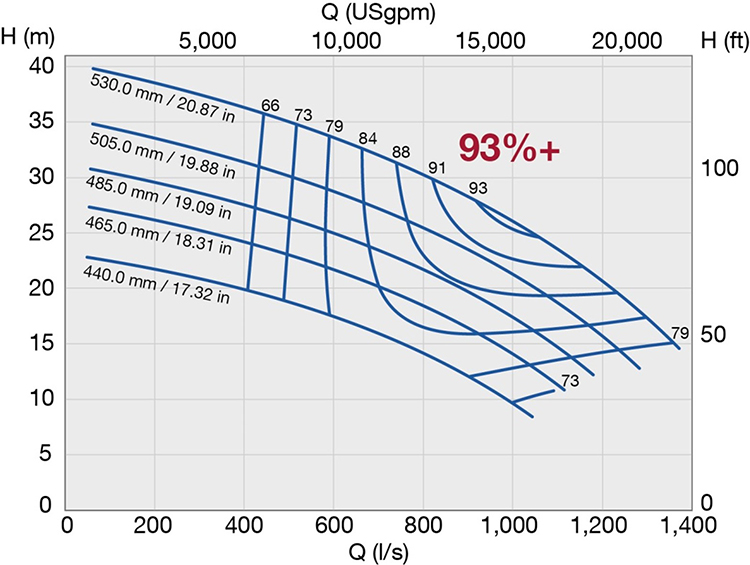 A centrifugal pump’s performance characteristics include a best efficiency range, where reliability and hydraulic efficiency are at their highest (figure 3). Modern pump designs can achieve very high efficiencies (figure 4) and selecting duty points in the best efficiency range should be a priority. Moving away from this range results not only in a loss of efficiency but also in compromised performance of bearing components and the wear life of hydraulic parts, which is particularly critical in slurry pump applications. This affects both energy consumption as well as useful component life. The most common reason why pumps operate away from the best efficiency range is the miscalculation of the site and operating conditions, resulting in the pump performance and system curve not meeting at the desired duty point.

Electric motors operate at optimum efficiency depending on the load at which they are running. Manufacturers provide performance data for their motors on rating plates which show, amongst other things, the efficiency at 50%, 75% and full load. While an undersized motor will not provide optimum performance, oversizing it is also not desirable as it affects the overall efficiency of the pump set.

A pump is not generally considered on its own, but as a complete set to include the driver and drive components, such as couplings, gearboxes and belt and pulley systems. There are inherent inefficiencies in gearboxes and particularly belt drive systems. Incorrectly fitted and maintained belts can be very inefficient. Electronic variable speed drives (VSDs) have been developed to be extremely efficient now and should always be considered as they allow direct driven pumps to be used with minimal losses. ln addition, VSDs can be used to control the pump speed to maintain the operating point as close to the best efficiency range as possible.

The operating life of components in contact with a pumped fluid will be compromised due to corrosion or abrasion if not selected to suit the application. The consequences can be the premature failure of parts which causes unplanned downtime, as well as the increased cost of replacement parts and associated labor.

As parts start to deteriorate due to corrosion or erosion, their performance is also compromised. A pump selected based on its as-new efficiency will eventually begin to consume more energy (figure 5). At some point, a decision needs to be made regarding the correct time for parts replacement as the cost of rising energy consumption must be offset against the cost of parts replacement; remembering that each breakdown incurs spare parts replacement, labor, warehousing and inventory handling costs. 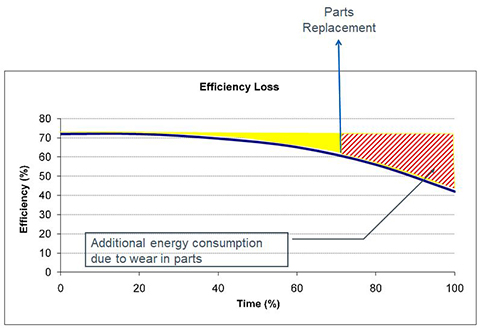 A pump’s useful part life can be extended by regular maintenance. While gland seal and bearing maintenance are common to all pumps, slurry pumps are susceptible to increased wear due to recirculation within the casing. This tends to increase as parts begin to wear and clearances become enlarged. The most affected components are the impeller and the suction side of the casing, where recirculation from the high to the low-pressure side of the casing is present.

lt is common practice to maintain a small gap between the impeller and the suction side of the casing, effected by either adjusting the impeller, the casing or suction liner. ln high wear applications, the extension to wear life can be significant.

So, in terms of calculating and managing the TCO of a pumping system, we need to look beyond the most obvious cost components, i.e. capital, spare parts, energy and labor, and consider the impact pump and motor selection, materials of construction and maintenance regime to get a full picture of the true cost of the assets. Of course, our experts at Sulzer are always happy to discuss pump design, operation and maintenance to help optimize your operations across a multitude of industries and applications.

About Sulzer
Sulzer is a global leader in fluid engineering. We specialize in pumping, agitation, mixing, separation and application technologies for fluids of all types. Our customers benefit from our commitment to innovation, performance and quality and from our responsive network of 180 world-class production facilities and service centers across the globe. Sulzer has been headquartered in Winterthur, Switzerland, since 1834. In 2019, our 16’500 employees delivered revenues of CHF 3.7 billion. Our shares are traded on the SIX Swiss Exchange (SIX: SUN). The Pumps Equipment division specializes in pumping solutions specifically engineered for the processes of our customers. We provide pumps, agitators, compressors, grinders and screens developed through intensive research and development in fluid dynamics and advanced materials. We are a market leader in pumping solutions for water, oil and gas, power, chemicals and most industrial segments. 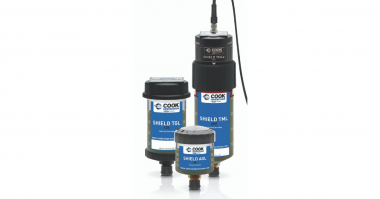 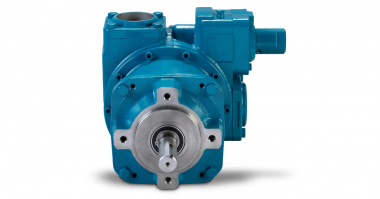 Blackmer®, part of PSG ®, a Dover company and a global leader in specialty pumps and reciprocating compressor technologies, is…

A major reciprocating and screw compressor OEM required a series of special couplings. This OEM designs packages for natural gas…