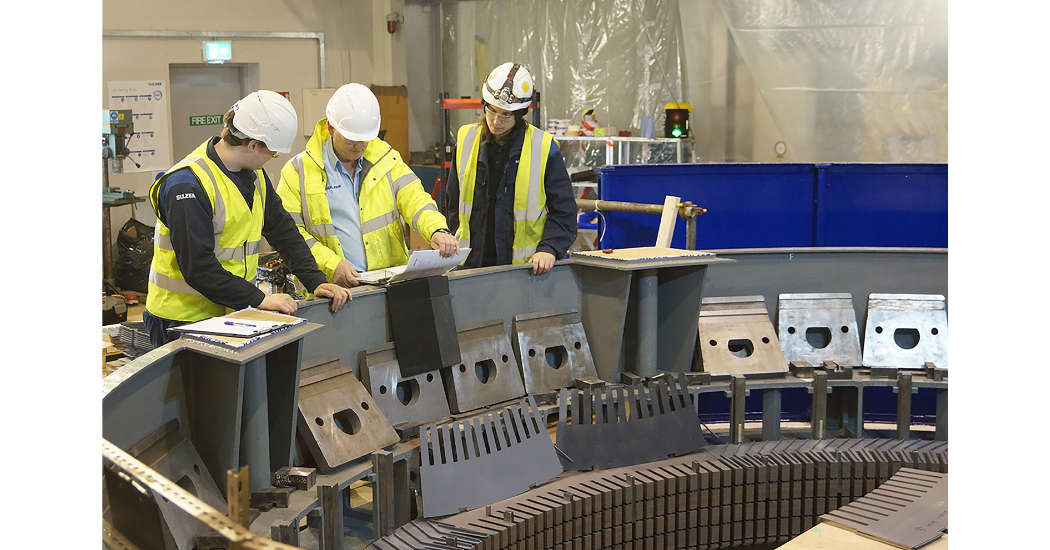 Hydropower generation sites across the UK have been delivering clean and renewable energy for decades. To ensure continued reliable operation, major components, such as generators need to be overhauled to prevent unexpected downtime. When the generator at the Dinas power station developed a fault, the project to refurbish the generator was awarded to Sulzer.

Opened in 1964 and located near Aberystwyth, the Dinas hydropower station is part of the largest hydro-electric scheme in England and Wales. After 56 years in operation, the generator at the facility had reached the point where a major overhaul was required. 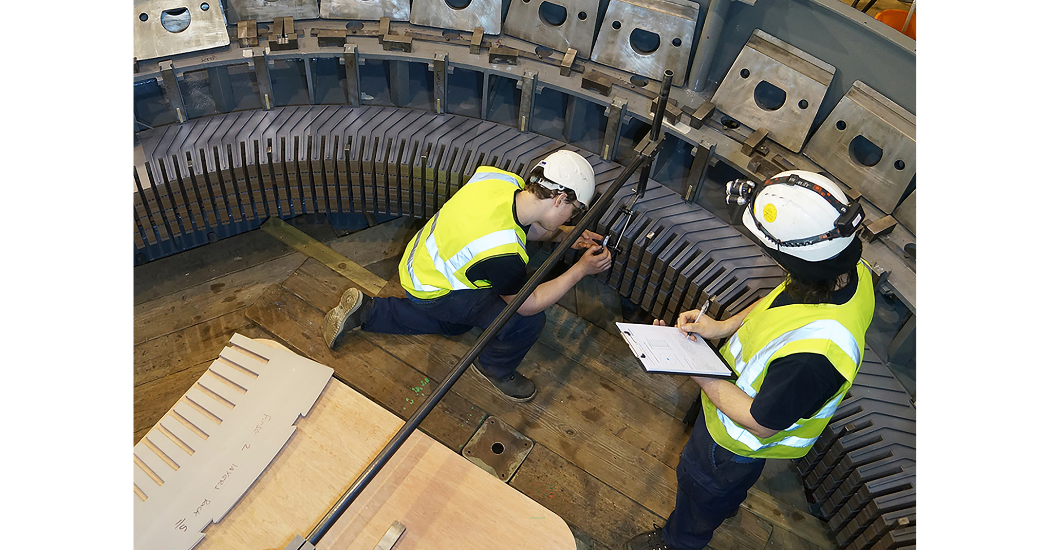 Sulzer rebuilt the core concentric to within 0.15 mm and circular from top to bottom to within 0.05mm

Operated by Statkraft, the generator is a 15 MVA, 12.1 kV, 13.5 MW (18’100 hp) unit that is driven by a Francis turbine. The original stator was built in two halves that were transported to the site and assembled during the 1960s. Since then, the generator has reliably delivered power to the local grid for over half a century. However, eventually some of the winding insulation started to breakdown and an earth fault was detected, which led to the decision to rewind and rebuild the generator.

Engineers from Statkraft disassembled the stator and discovered damage to the core as well as a coil failure. These issues set in motion a tender process and Sulzer was awarded the project. 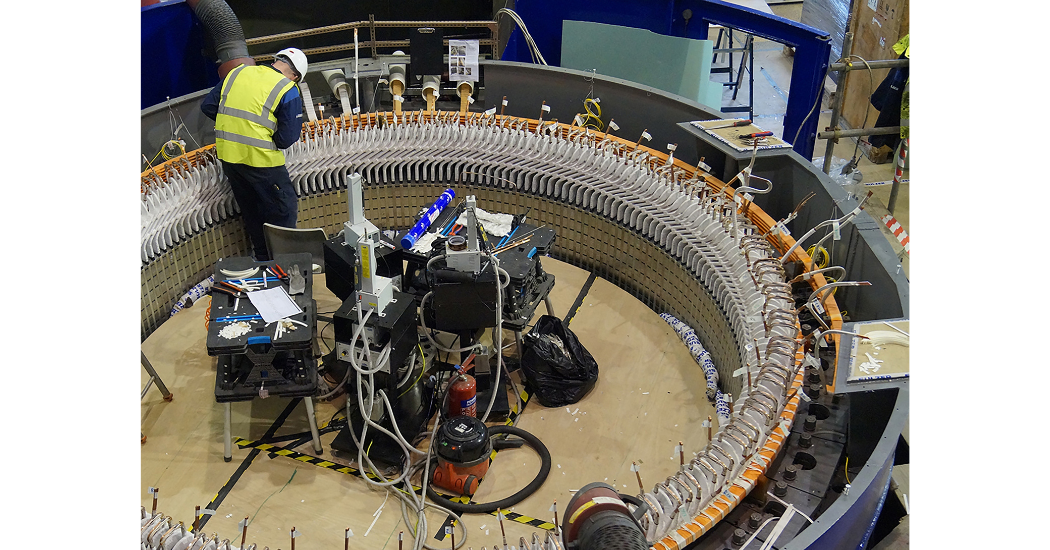 During initial site visits, Sulzer confirmed the project scope and assessed the building as well as the equipment that was available at the facility to help complete the repair. The first task was to install a new 3-phase distribution board and improve the electrical system so that it could safely support the equipment that would be required during the project. The installation of a fire alarm, spill kits and first aid equipment was routine, but there was also a need for heaters and dehumidifiers because the atmosphere inside the turbine building was around 95% humidity.

One of the first challenges was the rotor, which contained asbestos from the original manufacturing process. Statkraft wanted to retain the copper rotor poles and Sulzer was able to provide a solution to recover them safely.

Having established that the stator core would need to be replaced as well, Sulzer was essentially left with the generator frame as the starting point. The new core was built up using sectioned laminations to create a complete assembly without any gaps. In fact, Sulzer rebuilt the core concentric to within six-thousandths of an inch (0.15 mm) and circular from top to bottom to within two-thousandths of an inch (0.05 mm); a considerable improvement on the original. 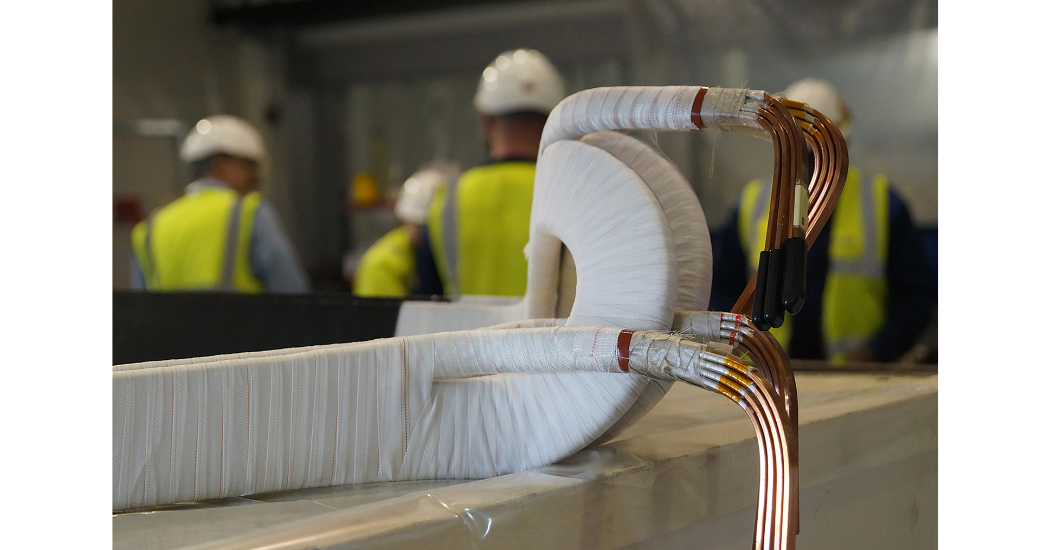 Spare coils were manufactured for Statkraft as part of the project

Two teams of winders were assigned to this project to work round-the-clock and ensure the generator repair was completed within the customer’s expectations. The teams consisted of three experienced winders and two younger apprentices who are learning the skills required for these projects. In this case, the teams were drawn from Sulzer’s network of service centers, including Falkirk, Ipswich and Middlesbrough.

Adrian Larmour, UK Sales Manager at Sulzer explains: “Sulzer is being proactive in training and developing the engineering skills of the next generation. There are many different designs of stator and larger hydro-electric equipment needs to be rewound onsite so our younger team members can learn a lot from a project like this one.”

Once the windings had been installed, the team built a tent structure over the stator and installed a series of heaters to bring the ambient temperature up to 180°C, which was then maintained for three days to cure the windings.

In all, 227 new coils were designed, manufactured and tested in Sulzer’s Birmingham Service Center. Of these, 216 were destined for the stator, with two spares for the build team and five spares for the customer. The remaining four coils were tested to destruction according to the specifications for hydro-electric applications and subjected to some of the most arduous test routines.

Sulzer has invested in the latest in hydrogen brazing technology, which not only saved six days on the rebuild time, but is also less demanding in terms of health and safety requirements. Traditional oxy-acetylene brazing uses lower temperatures, requires a set of gas bottles for each brazing station and the process produces fumes that need to be extracted away from the working area. In contrast, hydrogen brazing uses increased temperatures and produces water as the only by-product.

The process uses a hydrogen generator, which converts water to hydrogen gas that is supplied to a number of brazing stations. The higher heat concentration speeds up the brazing process and means that there is no need to reinstate the insulation after it has been completed, saving time for the project. In this case, three brazing stations were set up in the center of the stator, allowing the coil connection process to be completed much quicker.

Adrian concludes: “The investment in the hydrogen brazing equipment is an example of our ongoing commitment to further strengthen our service offering. For our customers, it means we can optimize the project times and keep downtime to a minimum.”

A process of continuous communication with Statkraft’s local engineers as well as advanced repair methods have ensured that the overall project was completed to the highest standards. The extensive refurbishment of the generator will deliver continued reliable operation for decades to come.

About Sulzer:
Sulzer is a global leader in fluid engineering. We specialize in pumping, agitation, mixing, separation and application technologies for fluids of all types. Our customers benefit from our commitment to innovation, performance and quality and from our responsive network of 180 world-class production facilities and service centers across the globe. Sulzer has been headquartered in Winterthur, Switzerland, since 1834. In 2021, our 13’800 employees delivered revenues of CHF 3.2 billion. Our shares are traded on the SIX Swiss Exchange (SIX: SUN). 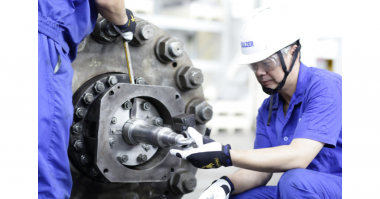