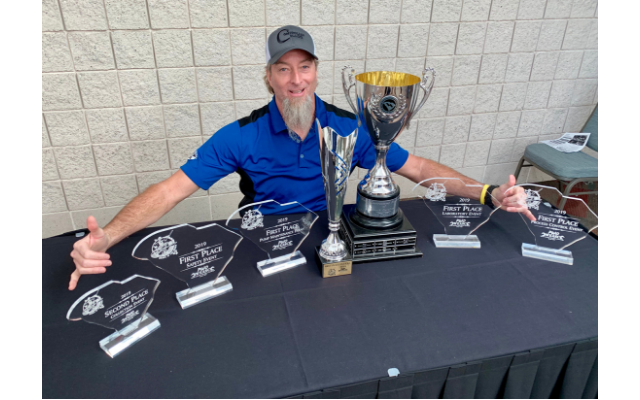 With a Class A Biological Wastewater Treatment Operator license and a Class C Water Treatment license, Troy Newton is the Wastewater Operations Foreman for Mount Pleasant Waterworks in South Carolina. He has been with Mount Pleasant Waterworks for 28 years and has achieved so many amazing things over the course of his career!  In 2017, Troy was the Water Environment Association of South Carolina Operator of the Year, and he went on to compete at IFAT 2018 last May as a member of Team KSB USA-East (You can watch him and Lacy Burnette compete in this video below).

Watch this short video of the #KSB Team #USA East – Lacy Burnette (left) and Troy Newton (right) – as they compete at the #IFAT #WorldWaterSkills competition in #Munich, #Germany! Different from the #OpsChallenge at #WEFTEC, but just as exciting! #GOTEAM

Watch this short video of the #KSB Team #USA East – Lacy Burnette (left) and Troy Newton (right) – as they compete at the #IFAT #WorldWaterSkills competition in #Munich, #Germany! Different from the #OpsChallenge at #WEFTEC, but just as exciting! #GOTEAMUSA

“I got started working in the industry right out of school. It wasn’t planned at all! I work with some great guys, which is great when everyone around you is working towards the same goal -protecting our environment.  I’m most proud of working for Mount Pleasant Waterworks; we have Commissioners and a GM that really cares about the wellbeing of their employees, customers and our environment. Living on the coast of South Carolina, we realize the importance of keeping the waterways safe and clean for everyone to enjoy. 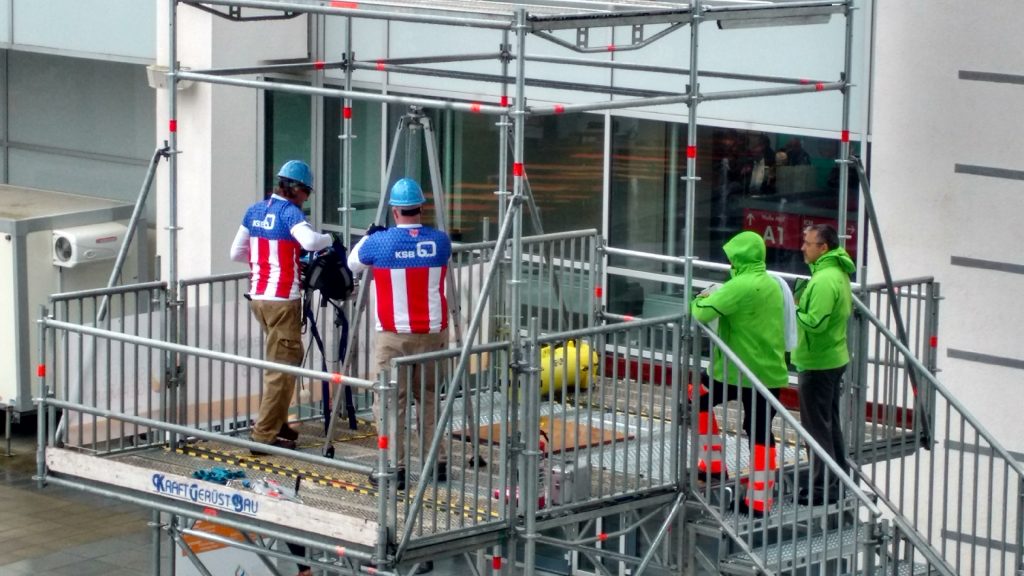 My advice to anyone new to the industry is that it’s not a glamourous job, but it is rewarding looking at it from an environmental perspective. You are an environmentalist, helping to preserve and save our rivers, streams, and oceans. Being the Foreman for our two waste treatment plants, there is always a project in motion. We do our own preventive maintenance and light repairs. For example, we change bearings and belts out on belt filter presses, we pull pumps, motors, band screens, and other equipment. There is always something that needs to be done! Working in wastewater treatment, many people are curious if the waste treatment plant “stinks”, and my answer is only in certain areas of the plant – mainly influent wet well to the pre-treatment process. Everything else just smells ‘earthy’, and in the occasions where we do come into contact with waste, we wear gloves and proper protection (like when we need to go into tanks or to clean and repair certain equipment). You get used to it! One cool thing is that we have a few school tours every year, and the elementary kids are the best! Our staff prepares them on what they are about to see, so you could imagine the questions they have! It’s awesome (::chuckles::). Some gag and cough loudly when we show them the hopper from the pre-treatment process, and they love touring the dewatering building and seeing the sludge cake coming off the press. We try to educate the public as much as possible about what we do. 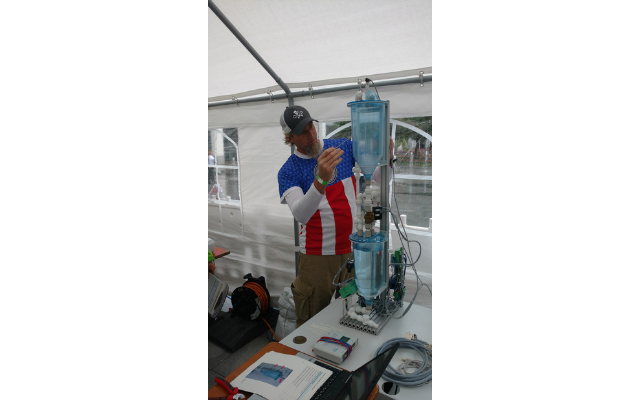 I got started with the Operations Challenge back in the mid 90’s when MPW was looking to build another team; that’s when I had the opportunity to join. I have been on 4 teams throughout the years: Centrifugal Force, The Liquidators, Liquid Force and now Controlled Chaos. I love competing. Like Greg Hill always says, “It gets in your blood; it’s a brotherhood”. The comradery from your teammates to every team you compete against is great! I have met so many awesome people over the years, learned so much about every treatment process that’s been used, and still learning! I think the Operations Challenge is probably one of the best networking tools out there! The beginning of the Challenge, everyone is out to win, to have fun in the process, and at the end of the day, everyone is spent! Then it turns into a beer commercial! It’s Great! 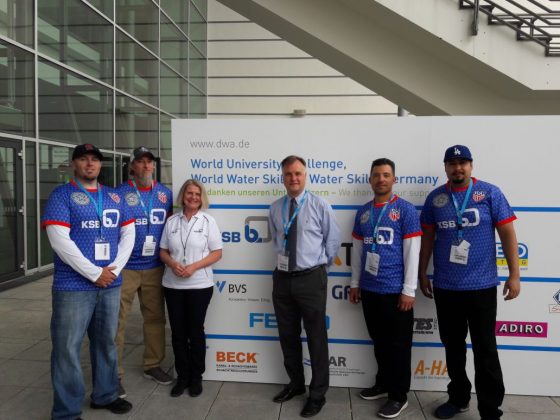 Last year, it was an honor to be a part of the KSB – USA East Team. Thanks to Steve Harrison (WEF) and Sherry Heinly (KSB) for making it happen. The competition is a little different over there; they are not as competitive as we are here in the States. The setup is a little different, but the IFAT in a whole is massive. There were so many vendors, there is no way to see them all! We had a blast! The German hospitality was amazing, and they made us feel right at home. We practiced a couple days at the Nuremberg Waste Treatment facility, and those guys were great. They gave us a tour of their facility, which was good to see the process was not much different than others in the states; however, there were some different ideas and views of the process which were very interesting. We got to know the operators that were competing in the challenge pretty well in the few days we were there. It was fun hanging out after the challenge. We exchange team jerseys and drank beer like it was October Fest! Competing at IFAT was a once-in-a-lifetime opportunity. I still keep in touch with a couple of the guys over there!”

On behalf of the entire team at Empowering Pumps & Equipment, Thank you for being one of our #PumpTalk Celebrities! We look forward to watching you compete at the WEFTEC Operations Challenge in the Fall! 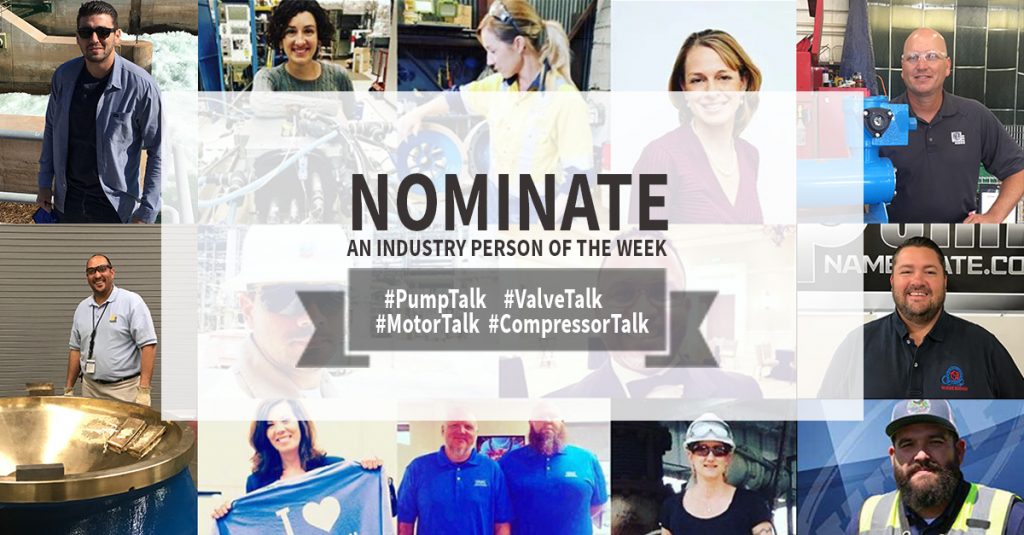 Know an Amazing Person who is making valuable contributions within your Industry? Nominate them to be “Person of the Week”! bit.ly/EPnominatePumpPerson 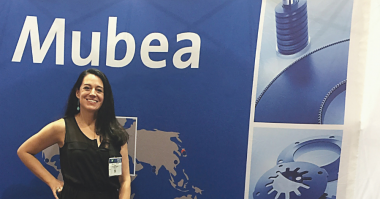 Today’s Industry Person of the Week is Shelley Ratterman Keeton. Shelley is a Sales Representative for MUBEA Disc Springs. Here… 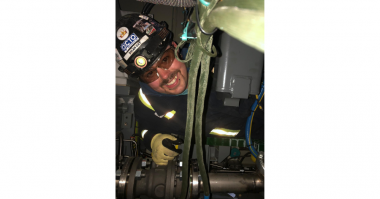 Industry Person Of The Week-Dylan Day

Today’s Industry Person of the Week is Dylan Day. Dylan is a millwright. Here is what he had to share! Q:… 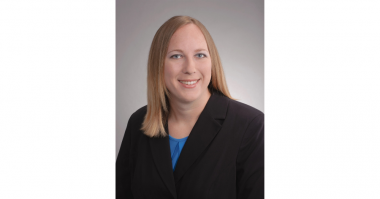 Industry Person of the Week-Rebecca Peters

Our Industry Person of the Week is Rebecca Peters,  P.E. with Transmission & Utilities - Southeast. Q: How did you get…

Air entrainment is the introduction of air bubbles into the pump impeller during operation. It differs from cavitation in that the bubbles are air rather…

How to Find and Fix Recirculation

Identification of recirculation cavitation in the field. By Sound Popping sounds coming from volute are intermittent and inconsistent in both sound level and frequency Sounds…