The story of Lab Ofichem is an interesting example of how the movements of a highly regulated market can change the face of a company. 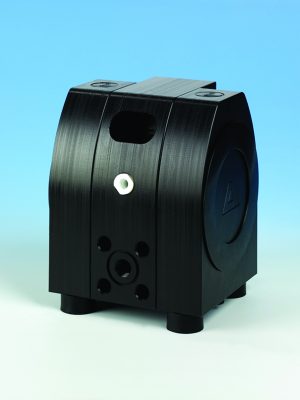 Originally founded as “Laboratorium Oldenziel Fine Chemicals” in 1975 by Dr. O.H. Oldenziel and his wife, H.H. Oldenziel-Meursing, Lab Ofichem established itself as a successful family-operated developer, manufacturer and distributor of active pharmaceutical ingredients (API) for use in the global human and veterinary-medicine markets over the next few decades. 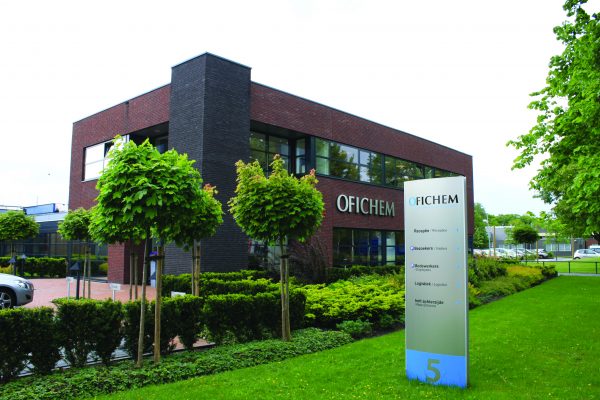 In nearly 40 years of operation, the Ofichem Group B.V. and its Lab Ofichem facility in The Netherlands has grown into one of the world’s leading producers of APIs for human and veterinary-medicine use.

That began to change in the late 1990s when Europe and North America began mandating to incorporate Good Manufacturing Practices (GMP) in their operations, meaning they had to define how and under what conditions a product was manufactured. While an admirable goal, the required use of GMPs had unintended consequences for many API manufacturers, namely higher production and equipment costs that enabled India and China—which were not subject to the mandates of GMPs—to intrude on the global APIs market more and more.

So, in 2006, Dr. Oldenziel made the decision to introduce the GMP guidelines into Ofichem’s API-manufacturing operations. Dr. Oldenziel did not get a chance to see the full blossoming of his vision, as he passed away in December 2006, but his legacy of innovation at Lab Ofichem, now part of a larger umbrella company (along with other subsidiaries Ofipharma and Indopharm) known as the Ofichem Group B.V., continues in both execution and name, as his and H.H.’s son, Weite Oldenziel, is now General Director of the Ofichem Group.

“In combining the knowledge of Lab Ofichem with the network of Ofichem B.V. and Indopharm we can help our customers more specifically with their questions and problems,” said Oldenziel. “We can also produce and analyze APIs, and have the facilities to be able to store a large amount of APIs in our own warehouse. In short, we have laid the foundation for a company that is ready for the future.”

That future already includes a global reach, with the Ofichem Group operating satellite sales offices in Barcelona, Spain; Hamburg, Germany; and Paris, France, while it also has two purchasing and auditing offices in China, where a lot of the company’s product research and development is performed.

Unlike many API producers that choose to focus their manufacturing efforts on a small number of specific types and categories of APIs, Ofichem develops a wide range of APIs for use in the creation of human and veterinary drugs and medicines, for example:

“A lot of companies are specialized in a certain product range, but we are one of the companies that have a large product range; we do about 50 products,” explained Remco Vree Egberts, R&D Manager and Project Leader for the Ofichem Group. “We have our products that we produce all year long and sell to the market, but we also have the capability to produce customer-specific products, which are only produced when the customer orders them.” 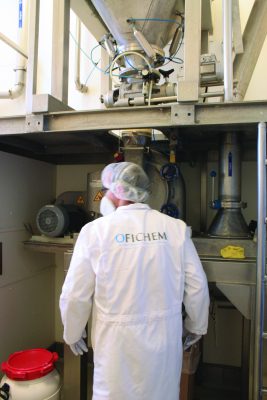 The explosive, flammable, corrosive, toxic and hazardous nature of many of the liquids used in API production require extreme handling precautions. Leak-free, ATEX-certified Almatec® AODD Pumps help ensure that the highest levels of safety are met.

While Ofichem may produce a vast array of APIs, they all have one thing in common: they must be manufactured to exacting standards. To ensure the quality of any produced API, various methods of quality-assurance analysis—High Liquid Performance Chromatography (HLPC) and gas chromatography are two examples—are performed to see if any impurities have made their way into the final API.

“We have a lab that analyzes every product that we produce,” said Egberts. “In that lab there are different sections, a wet section and a dry section, with specific equipment in each.”

Ofichem’s API production takes place in three production areas ranging from small- to large-scale facilities. In the large-scale production area, for example, as many as 500 kilograms (1,100 pounds) of solvents, acids or powders will be transferred in a single day, with various liquids also used to facilitate any number of chemical reactions. One of the most dangerous chemicals Ofichem handles is hydrochloric acid, which is highly corrosive and must be handled with extreme care. To that end, because of the toxic, corrosive and dangerous nature of many of the raw materials that Ofichem uses, safety for both site personnel and the environment is an overriding day-to-day concern. 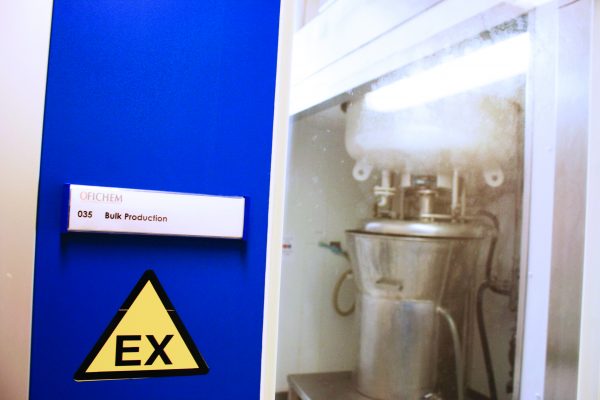 “If you look at safety issues, our highly toxic products are kept in special areas, things like carcinogenics that cause cancer,” said Egberts. “Also, if there happens to be a fire, we mandate that the area should be enclosed for at least 60 minutes.”

Handling corrosive, toxic and flammable materials is a fact of daily life at the Lab Ofichem facility, which is why it is critically important that the correct type of pump be identified and incorporated into the production process. Wim Ekkelkamp is Ofichem’s Technical Manager and the man responsible for purchasing the pumps that are used in the Lab Ofichem production facility. 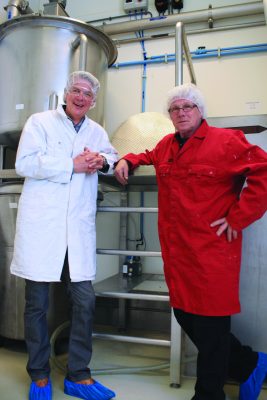 The safe, reliable performance of the Almatec® CX Series AODD Pump has helped put smiles on the faces of Ofichem’s Wim Ekkelkamp, right, and Gerrit Klaassen of Holland Air Pumps.

“We have to keep production moving, we have to keep downtime as low as possible, and we have to be safe, so when we are purchasing any new equipment, the quality is very important,” he said.

In 2007, Ofichem was looking to upgrade the pumping equipment at the lab and reached out to Gerrit Klaassen, Commercial Director of Holland Air Pumps, Oirschot, The Netherlands, for some recommendations. 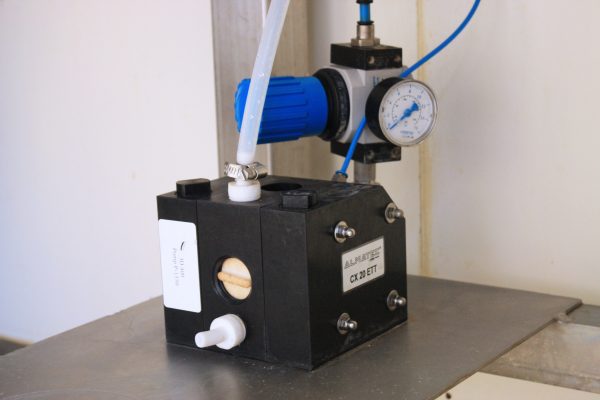 The safe, reliable performance of the Almatec® CX Series AODD Pump has helped put smiles on the faces of Ofichem’s Wim Ekkelkamp, right, and Gerrit Klaassen of Holland Air Pumps.

“For me, it was obvious that Ofichem needed a safe pump in this environment, one that has no leakage,” said Klaassen. “A plastic pump that is easily cleaned and has no corroding parts, that would be ideal for the application.”

As it happens, Holland Air Pumps is a distributor of air-operated double-diaphragm (AODD) pumps from Almatec®, Kamp-Lintfort, Germany. In analyzing Ofichem’s API-production setup, Klaassen determined that the Almatec E-Series and CX Series AODD Pumps would be the ideal solutions. 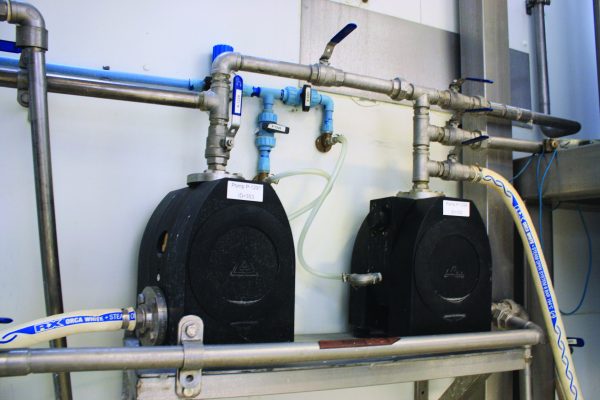 For seven years, Almatec® E-Series AODD Pumps have been providing Lab Ofichem with unparalleled safety in its API-manufacturing operations, from both a plant-personnel and end product perspective.

E-Series and CX Series pumps are made of solid-block PE conductive and rated for use in explosion-protected areas as they meet the ATEX requirements of European Directive 94/9/EG regarding the use of equipment or systems in potentially explosive atmospheres. In terms of operation, these pumps are self-priming and dry-run capable, and possess the ability to empty containers completely. Air consumption and operating cost are optimized through the incorporation of the patented, maintenance-free PERSWING P® air-control system.

“Ofichem chose these pumps because they are reliable, they are very easy to clean, both on the outside and the inside, they are ATEX-certified, which is very important in our production areas, and they have very quiet operation; these are the reasons why we use the Almatec pumps,” said Ekkelkamp.

“The thing is, quality is also important, because if you buy a cheaper pump but have downtime of one month every year, then the pump is not cheaper,” added Egberts. “With these pumps we have very low downtime and that’s the most important for us because if our production time is down one day we will lose at least €7,425. That’s why we choose pumps based on quality, not price.”

When the Ofichem Group—for almost 40 years a global leader in the critical industry of API production—decided that the time had come to introduce Good Manufacturing Practices to its API-production operation, it knew that this meant that each and every aspect of production would have to operate at the highest level of efficiency and safety.

So choosing the proper pump technology became a top-of-mind concern for Ofichem’s daily handling many different types of hazardous, toxic, flammable and corrosive chemicals. Any concerns have been assuaged through the incorporation of Almatec AODD Pump technology in its chemical-handling applications.

“It’s very important that our pumps don’t break, that they have solid-block construction and that they don’t have any corrosion,” said Egberts. “If there is any corrosion in the pump, I can’t use it anymore. We chose the Almatec pumps because they are capable of handling the products we are using. It’s a personal-safety issue—you don’t want any leaks, you don’t want people getting products on them. It’s also a product-safety issue, which in our business is very important. We have been using Almatec pumps for seven years at this facility and we’ve never had a problem with them. We are really happy with them and will continue to use them in the future.”

Peter Schüten is the Almatec® Product Manager with Almatec Maschinenbau GmbH, Kamp-Lintfort, Germany. He can be reached at Peter.Schueten@psgdover.com or +49 2842 961-0. Almatec is one of the world’s leading manufacturers of air operated double-diaphragm (AODD) pumps, owns numerous patents and has one of the largest product ranges in the field of pneumatic diaphragm pumps. Almatec is part of PSG®, a Dover company. Headquartered in Oakbrook Terrace, IL, USA, PSG is comprised of several of the world’s leading pump brands, including Abaque®, Almatec®, Blackmer®, Ebsray®, Griswold®, EnviroGear®, Mouvex®, Neptune™, Quattroflow™, RedScrew™ and Wilden®. For more information on Almatec or PSG, please go to www.almatec.de or www.psgdover.com. 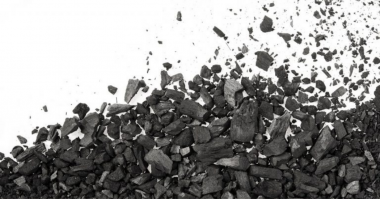 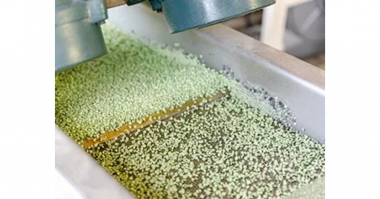 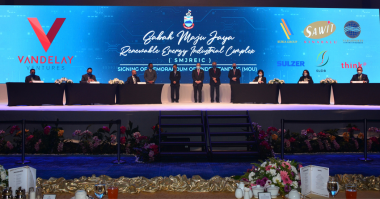