Boone, N.C. is the location of Jimmy Smith Wastewater Treatment Plant (WTP). Boone is a town of 17,000 that sits at an elevation of about 3,300 ft. The plant serves Boone as well as the Appalachian State College and a few businesses outside of the city’s limits, with a permitted capacity of 4.82 million gpd. Since it opened in the 1990’s, however, the plant has experienced water hammer issues, according to plant maintenance technician Darrell Moody.

The three influent pumps at the plant feed into a common header that goes uphill for about 80 ft before discharging into an aeration basin. The plant uses traditional 16-in. AWWA swing check valves, which have experienced sometimes violent pressure resulting in water hammer and equipment damage.

The elevation and pump dead head pressure creates a “kind of perfect storm,” said Ryan Cain, an outside sales associate at Valve & Pump Specialties, Inc. in Wilmington, N.C. The company serves as a manufacturer’s representative for Proco Products, Inc. “The extent of the problem is magnified because the elevation is so high. You can have head pressure coming back and a pump coming on a the same time, causing a pretty incredible situation,” said Cain. 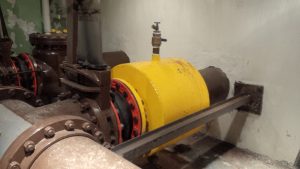 Prior to installation of the ProFlex Style 750 valve, water hammer had been a consistent and severe issue with this header assembly.

A severe water hammer event in the late 1990’s ruptured the piping and caused the pump room to be filled with raw sewage, said Cain. Because of this, large structural beams were added in the plant’s pump room to connect the header pipe to the walls. In February 2013, the Jimmy Smith WTP had just undergone the rebuilding of all three of its influent pumps when another violent water hammer event occurred, destroying one of the check valves, said Cain. The valve disc had slammed so violently that it wrenched the seat ring from the valve body, warping the previously-round bronze seat ring into an egg shape. 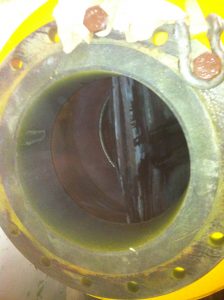 Shown here is the rubber valve inside the metal housing, viewed from the discharge end of the valve.

Needing to find a new check valve to replace the one that was destroyed, Moody contacted Cain. Cain recommended the Proco ProFlex™ Style 750, which eliminates water hammer issues with its rubber duckbill design. “Rubber does a lot to absorb energy,” he said. “Even if you have a high elevation discharging reverse flow and another pump in the header system coming on, you’re forcing two rubber faces to come back to one another rather than slamming metal on metal.”

Since a check valve needs to be sized properly to the piping systems, Proco recorded information such as the flow velocity and pump dead head pressure to ensure a properly engineered valve. The Proco ProFlex™ Style 750 needed to meet several requirements for this project. Since the valve is one of the three on a common header, the Proco ProFlex™ Style 750 needed to withstand both instantaneous surges of back pressure as well as pump dead head pressure. Due to the abrasive nature of raw sewage, Proco determined the check valve needed a rubber lining to extend its wear life. Also, per the client’s request, the check valve had to match the face-to-face dimension of the existing check valve.

Proco presented a 16-in. Proco ProFlex™ Style 750 to Boone that met those requirements, and also included flush ports that allow for the cleaning of solids collection without an operator having to directly handle the sewage. Since the check valve is mounted to a rubber expansion joint on the discharge side of the check valve, Proco also included a structural support for the existing expansion joint. 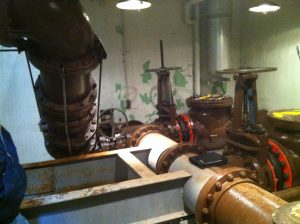 Prior to installation of the ProFlex Style 750 valve, water hammer had been a consistent and severe issue with this header assembly.

The new Proco valve was installed on May 13, 2013, and the pump’s water hammer issues have since been eliminated. Moody admitted that initially, some of the plant’s operators were skeptical of the new check valve’s design. “A lot of the operators wondered if the duckbill design would work,” he said. “When they listened to when the pump shut off and how quiet it was, they were quiet after that.”

The other two pumps at Jimmy Smith WTP still have some water hammer issues, but Moody has a plan for when they need to be replaced. “We’ll go back to Proco no matter what,” he said. “There’s nothing mechanical on (the ProFlex™ Style 750). There’s nothing to check, nothing to grease and nothing to worry about. As far as simplicity goes, it’s great for a maintenance tech like me.” And most importantly, the ProFlex™ valves provide silence. 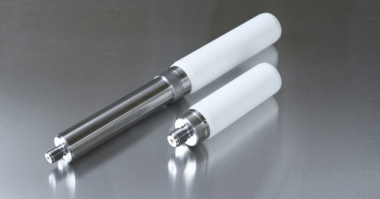 The Fortis MC ceramic plunger is just one of many high-quality, reliable parts that TPCI produces for reciprocating pumps used… 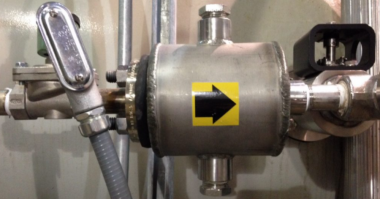 Why Choose Check Valves Check valves are commonly found in industries where fluids are pumped through piping systems. These are one-way,… 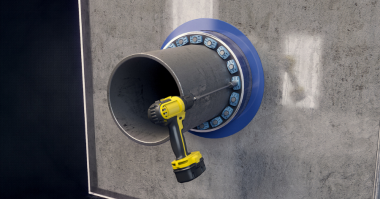