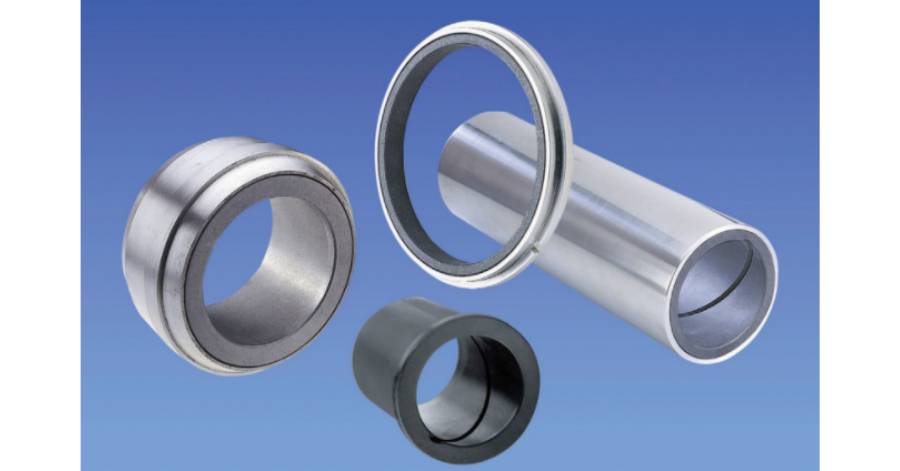 When a vertical turbine pump broke twice inside three years at a major US oil refinery, engineers knew there must be a major problem. The second shaft break was in exactly the same place as the first. The solution came with a special alloy capable of operating at extreme temperatures.

The 500,000 barrel a day refinery in Texas operates a maintenance program aimed at running 10 years between major repairs. That clearly was not being achieved with one particular vertical pump which broke in July 2010 and again in exactly the same place in May 2013.

A thorough inspection and analysis revealed the underlying issue was not with the shaft itself but with the use of the wrong type of bearing materials. The unit in question was a 4-Stage 14 GH Byron Jackson vertical turbine pump. When it came into the service repair workshop, it was completely disassembled and inspected before repair.

This included checking and recording dimensions, blasting and cleaning all components for inspection, performing a complete visual and dimensional inspection of all parts and performing Non-Destructive Examination (NDE) such as Magnetic Particle Testing/Dye-Penetrant Testing (MT/PT) and Positive Material Identification (PMI). Once this was completed, a report was submitted to the refinery’s rotating equipment group for approval.

The head shaft was broken at the end of the threads and the line shaft and pump shaft bearings had moderate or heavy rub damage. The bowl bearings, suction bell bearing, stuffing box bearing and line shaft bearings all had excessive clearance to the shaft outside diameter. Various components showed minor erosion, pitting or galling. NDE found cracks in the suction bell, bowl vanes and bearing fit areas, as well as a 12 in crack through the discharge bowl flange.

The first and second stage impellers also had small crack indications which were repaired by braze welding. “Whether a crack is obvious and seems severe or whether it seems insignificant, we are going to recommend a repair,” said the sales engineer at the service repair shop in Texas. “Cracks are not by design. If you see one, you need to ask questions about what is happening during operation and why these cracks have formed.”

It is usual to see wear on the ID of a sleeve bearing because of possible contact with the pump shaft OD and exposure to the fluids being pumped. But there should not be corrosion damage on the ID or OD. 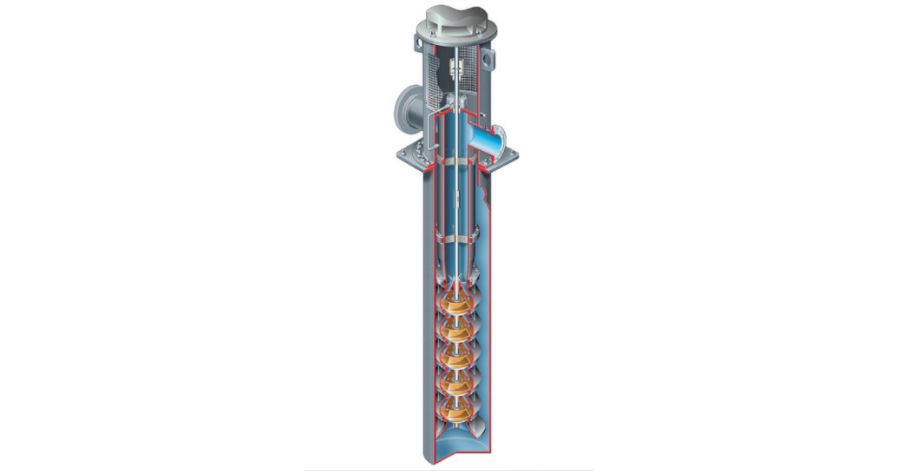 A typical example of a Graphalloy-fitted pump.

The bearing damage also provided a possible root cause for the cracking in the shaft and other components. Once the ODs degraded, the shaft lost support, was allowed to deflect excessively and introduced vibration into other pump components, leading to stress and cracking.

The bronze bearings in the pump should be able to withstand exposure to the isopentane being pumped. But there is an occasional inflow of caustic soda which readily reacts with bronze. A new bearing material needed to be chosen that would work with both isopentane and caustic soda. The refinery’s rotating equipment group was then contacted to generate ideas for a replacement material.

Based on a recommendation from an engineer at the plant, they came up with Graphalloy, a graphite/metal alloy that acts as a self-lubricating bearing material. The sales engineer at the service repair shop said: “Graphalloy is a material that is compatible with a wide range of pumped liquids and offers a good option in high-temperature applications.” Since it is self-lubricating, the bearings don’t require grease or oil. Not only does this reduce maintenance requirements, it also allows Graphalloy to work under conditions where lubricants or plastics cannot.

Temperature is not a concern since this material has products that work at temperatures as high as 530°C where oil-based lubricants would burn off or oxidize and plastics would fail. For cryogenic applications such as liquefied natural gas, these bearings will maintain their self-lubrication without congealing or solidifying. If a pump runs dry, they will maintain lubrication without galling or seizing.

For this vertical pump application, they chose Graphalloy GM 111.3, a nickel graphite/metal alloy material that would withstand temperatures up to 400°C and offer self-lubricating and corrosion-resistant properties. Graphalloy bushings were installed into the stuffing box, column, bowl and suction bell bearing fits.

Once machined, welded, cut, bored, reassembled and tested, the pump was painted, packed and shipped back to the refinery for installation and is operating efficiently with no reports of problems.

Where to Deploy Graphalloy® Materials 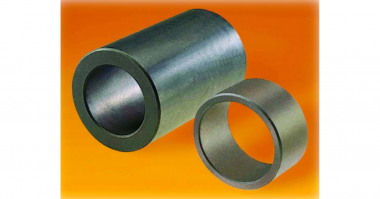 Switching to a new graphite/metal alloy bearing material helps a major glass manufacturer save $250,000 per year in a high-temperature…