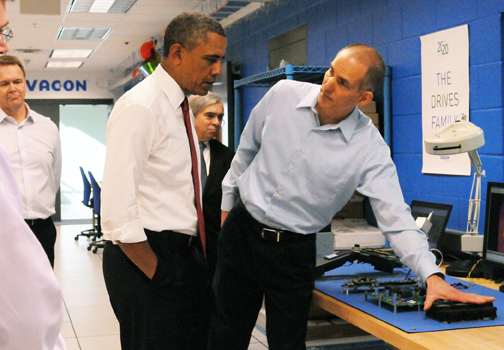 Global AC drives manufacturer, Vacon, has estimated that its AC drive products helped save approximately 55 TWh of electrical energy for the year 2013, a 10% increase over the previous year (in 2012, Vacon reported savings of 50 TWh of electricity with the help of their AC drives).

“Electric motors and the systems they drive are the single largest electrical end‐use, consuming more than twice as much as lighting, the next largest end‐use. It is estimated that EMDS [electric motor-driven systems] account for between 43% and 46% of all global electricity consumption… “

Vacon AC drives adjust the speed of electric motors according to actual process need, typically reducing energy consumption by 20 to 50%. According to studies, the payback period for AC drives has continued to shorten. For example, in pump and fan applications the payback time can be less than one year. “Vacon has delivered AC drives since 1995. From the technological perspective, AC drives will be more energy efficient and offer better performance in the future. Competing or substitute technical solutions do not exist for AC drives and are not within sight,” says Vesa Laisi, Vacon’s President and CEO.

As part of the company’s global initiative on energy efficiency, Vacon is a member of the Next Generation Power Electronics Institute. This institute brings together the expertise and vision of 25 companies, universities and state and federal organizations to develop and manufacture wide band-gap (WGB) semiconductor–based power electronics. WBG semiconductors – the same materials used in LED light fixtures and many flat screen TVs – will improve energy efficiency in the next generation of power electronics while also reducing cost and system size. WBG-based power electronics function at higher operating temperatures and frequencies than today’s widely used silicon-based electronics. WBG technology will benefit variable frequency drives with further increased efficiency for industrial motor systems. (3)

On January 15, 2014, President Barack Obama announced the selection of North Carolina State University, home to one of the nation’s largest undergraduate engineering programs, to lead the Next Generation Power Electronics Institute. Prior to his announcement speech at NC State, the President and Secretary of Energy, Dr. Ernest Moniz, toured the Vacon Research and Development Center, located in Research Triangle Park, NC.

During the Vacon R&D facility tour, Dan Isaksson, Medium Voltage Drives Vice President, demonstrated for Messrs. Obama and Moniz “how Vacon is actively involved with making the world and our way of living more sustainable in terms of energy efficiency.” Isaksson went on to elaborate on the company’s efforts to unite the best people working together to develop the best products, applications and services for customers: “The newly-published Vacon vision is tangible here in North Carolina. The combination of a highly skilled and innovative workforce, a business-friendly climate and the opportunity to collaborate with various companies and universities made the Triangle area a great choice for Vacon.”

At his North Carolina State University campus address, President Obama concurred, “So the reason I came here today is because we’ve got to do more to connect universities like NC State with companies like Vacon to make America the number one place in the world to open new businesses and create new jobs. We want to do that here in North Carolina, and we want to do this all across America.”

While it’s too soon to project the TWh savings for Vacon AC drive installations for 2014, there is no question: the company’s drives are among the nation’s and world’s best choices to increase the efficiency of industrial motor-driven processes while dramatically reducing the associated energy consumption and cost.

Vacon is driven by a passion to develop, manufacture and sell the best AC drives and inverters in the world – and provide customers with efficient product lifecycle services. Our AC drives offer optimum process control and energy efficiency for electric motors. Vacon inverters play a key role when energy is produced from renewable sources. The company has production and R&D facilities in Europe, Asia and North America, and sales offices in 27 countries. For North America, our main offices are in Milwaukee, WI and in Stoney Creek, ON Canada, both offering state-of-the-art training and demonstration facilities. Our Chambersburg, PA manufacturing facility, built in 2009, was awarded the prestigious LEED Gold Certification in 2010. Further, Vacon has sales representatives and service partners in nearly 90 countries. Shares of VACON Plc (VAC1V) are quoted on the main list of the Helsinki stock exchange (NASDAQ OMX Helsinki).