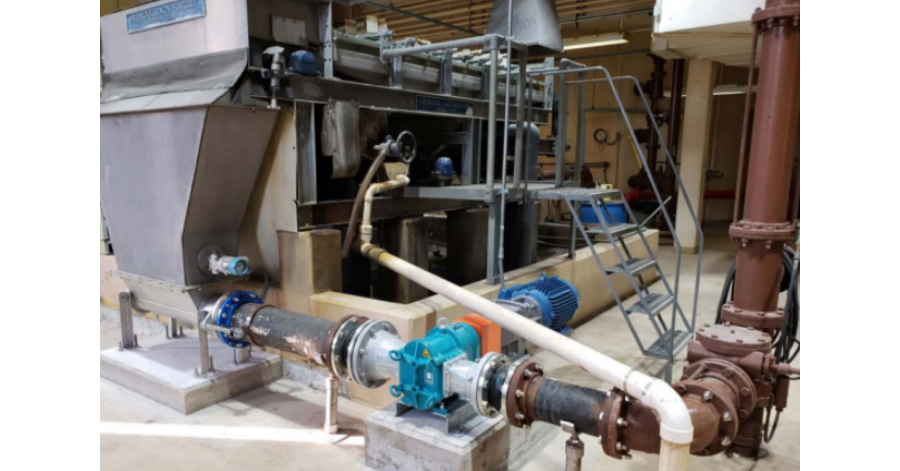 Situated between Madison and Milwaukee, Oconomowoc is a city in Southeastern Wisconsin whose name means “where the waters meet.” Nestled between the Oconomowoc River and several pristine lakes, Oconomowoc is home to approximately 16,000 residents.

The City of Oconomowoc Wastewater Treatment Facility (OWTF) has treated more than 36 billion gallons of wastewater since it began operation in June of 1977.

OWTF uses a plug flow-activated sludge process. Sludge treatment at the plant begins with air floatation thickening (AFT), which increases the solids concentration from 1 percent to 3.5 percent. This activated sludge is then combined with primary sludge and pumped to a primary digester, where it is heated and mixed for about 35 days.

The digested sludge is then treated with polymer and transported to a gravity belt thickener. During this step, the polymer-treated sludge is further thickened to 5 to 7 percent solids as water drains through the porous belt. The resulting biosolids are then pumped to a tank where they are stored until they can be transported to local farms to be reused and recycled. OWTF produces an average of 1.7 million gallons of recyclable biosolids each year.

Each day, the plant handles an average of 2.4 million gallons of wastewater, the equivalent of 3.6 Olympic-size swimming pools.

The resulting treated water meets the stringent requirements set by the Wisconsin Department of Natural Resources and is discharged into the Oconomowoc River. 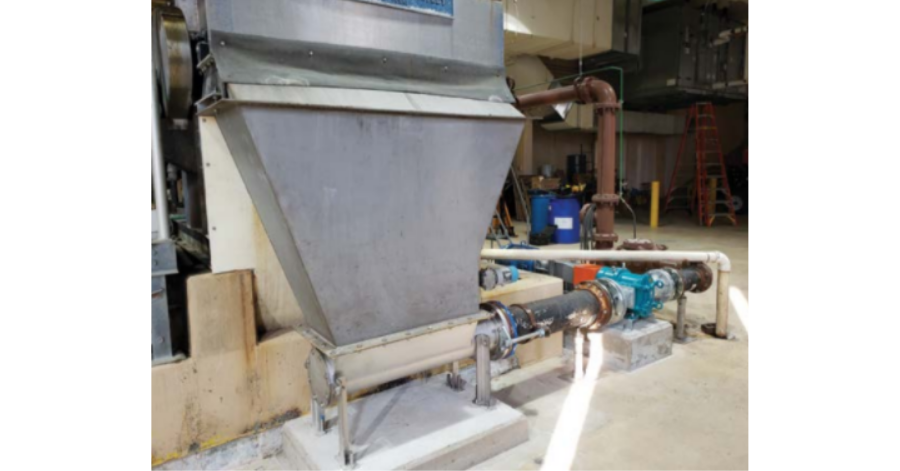 Once the sludge is thickened to 5 to 7 percent solids on the gravity belt, it drops onto an outlet hopper. Downstream of the gravity belt is a pump responsible for conveying the thickened sludge to the storage tank about 400 feet away.

In recent years, OWTF has faced issues related to its gravity belt solids-offloading pump. This is not unexpected in a facility with equipment that has had four decades in service. Installed when the plant began operating in the late 70s, the existing four-stage progressive cavity pump (PCP) had begun experiencing pump efficiency losses, mechanical seal failures, as well as unwelcome long lead times. Because of the pump’s age, the plant also faced challenges with obsolete or unavailable aftermarket parts.

“Over the years, the pump just started to show its age,” said Bryan Viitala, regional sales manager for Boerger LLC, which supplied replacement technology for this application.

“The existing pump was having mechanical seal issues. Additionally, it was difficult and expensive to source new parts for this pump, including rotors and stators.”

The existing gravity belt solids-offloading pump is one of 10 PCPs used throughout OWTF. About 13 years ago, OWTF began replacing these PCPs with rotary lobe pumps. Wastewater Operations Manager Kevin Freber and Operations Foreman Tom Dickson compared the cost of rebuilding the existing PCPs with the cost of replacing the systems with rotary lobe pumps and decided a complete overhaul would yield the greatest return on investment (ROI).

“We were starting to have failures, and we were looking at costs of the rebuild and how much money we wanted to invest in the older infrastructure,” Dickson said. “Our first rotary lobe pump we got in 2006. Throughout the years, we’ve been putting them in, and the new technology is better. The rebuilding of the pumps was a lot more involved with the PCPs, and they took up more area. They are more expensive to repair and run on more horsepower than the new rotary lobes.”

The gravity belt solids-offloading pump replacement—the most recent for the system— occurred in November 2018. “They’re durable and easy to work on. …To move the thicker sludges that we have to move, the rotary lobes seem to work better, and they don’t plug or clog,” Dickson said.

Freber added, “Maintenance to do a rebuild is very reasonable.”

For the gravity belt thickener application, the pump manufacturer worked with OWTF to design a new hopper and pump assembly. They fabricated a stainless steel hopper and provided a PL300 rotary lobe pump with an 8-inch inlet flange and 6-inch outlet flange.

“The driver for the project was they had an old existing pump, and parts availability and service were either difficult or unavailable,” Viitala said. “And that was how we were able to help out. We knew we could provide a system that would give these guys a long-term solution for that application.”

The pump is designed to handle 5 to 7.5 percent solids at 30 to 150 gallons per minute (gpm) and 20 to 75 pounds per square inch (psi). The pump includes a 15-horsepower (hp) motor, which is controlled by level sensors and a variable frequency drive (VFD). The rotary lobe technology as well as the tapered design of the hopper, which was a custom-manufactured part, enabled OWTF to avoid the screw-feed system previously used with the previous PCP.

While the new system can operate without the screw feed, Dickson and Freber say they have the option to use it if they need to in the future. In addition to requiring less hp than the previous pump, the new pump assembly is quieter and has a smaller footprint—the base is about 4 feet smaller than before.

While the previous system utilized a mechanical speed drive, OWTF decided to integrate a VFD with this upgrade. Level sensors within the hopper allow the end-user to ramp up or ramp down the flow rate of the pump as needed based on the sludge level at the hopper. “Since the system is fully automated, the operator is free to do other tasks instead of sitting around and turning a pump on and off,” Viitala said.

Standard maintenance for this system includes oil changes every 6 to 12 months, replacement of the elastomeric rotors and hardened steel wear liners as pump efficiency decreases, and replacement of mechanical seals.

“This (system) should last another 20 to 25 years,” Viitala said. “Generally speaking, when we size a rotary lobe pump, we try to size it for less than 300 revolutions per minute. By doing that, you reduce the wear and tear on the pumping end of the pump. We are fairly conservative in the sizing of our equipment to ensure the end-user gets a long life out of the pump.” 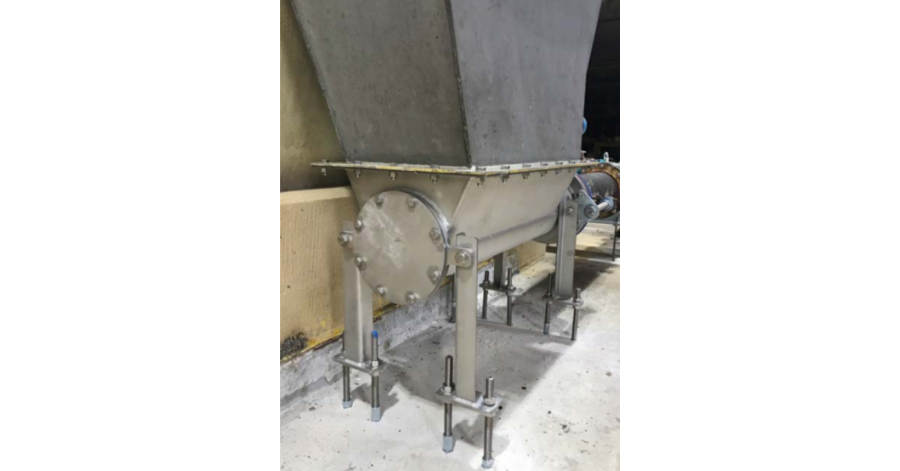 Because of more readily available parts, quick service, easier maintenance, reduced hp required and lower cost of operation, the switch to rotary lobe technology has yielded significant benefits for OWTF. Seven of the 10 PCPs have been replaced, and the plant plans to replace the remaining three by the end of 2019.

“It’s definitely a step in a better direction for us with that installation,” Dickson said. “You can definitely see improvements on the size, hp required, and how easy it is to work on and install.”

Borger is an international pump manufacturer with more than 330 employees worldwide. Headquartered in Borken-Weseke, Germany, the company designs, produces and sells a variety of pumps and related equipment, including chopping units, separation technology, entry technology and agitator equipment. The rotary lobe pump is the group’s core component. The pump is ideal for applications with low to highly viscious and abrasive media. 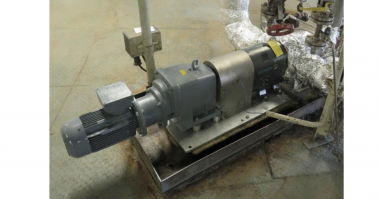 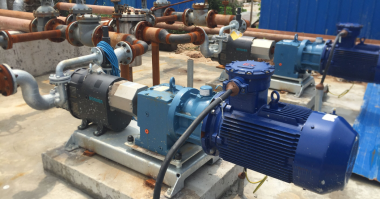 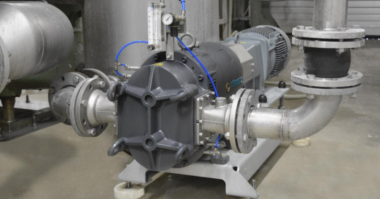