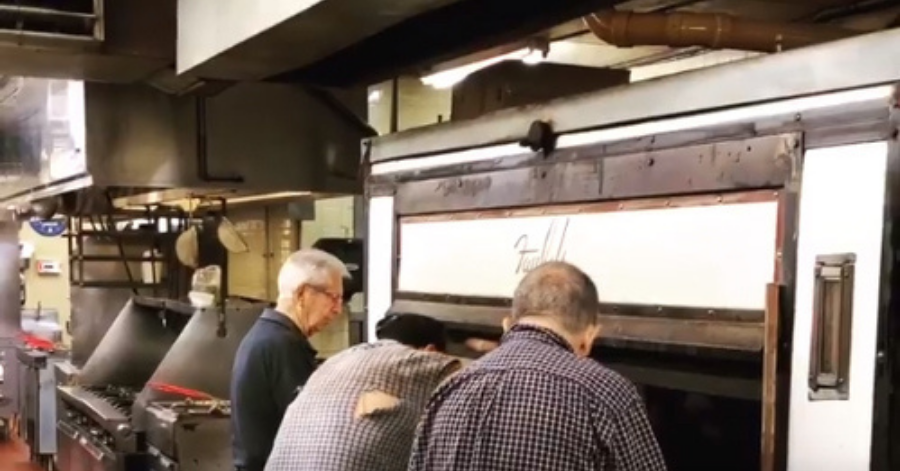 When pizza lovers walk into the carry-out room of Lino’s Pizza & Italian Restaurant in Rockford, Illinois, they can see their food in motion—cooking to perfection on a Ferris-Wheel type oven with six rotating trays that stay level as they circulate around and around and around. 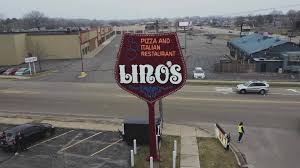 Located about 90 miles west of Chicago, a city with a history of making signature deep-dish pies, Lino’s is a family business that spans three generations. Its pizza oven is more than 80 years old, and they want it to last another 40-plus years. There are newer technologies available, but this oven is part of the character and charm of Lino’s.

“Our customers feel really warm and fuzzy when they come in and see that old oven cranking away in our kitchen,” says Joe Battista, whose father Mike (91-years-old) started the company in the early 1970s. They run the business along with Joe’s son-in-law Charlie Schweinler. “Charlie is more nostalgic than the other two of us. He says if we change that oven, people will think we changed our product. It’s become a part of our brand and a part of the charm of our business. It’s important that it operates effectively.”

Sometimes the 80-year-old machinery fails, and for a company that makes more than 2,000 pizzas a week, along with other pasta and Italian-American delectables, if the rotating oven breaks down on a Friday night with 500 orders in queue, it’s a problem that must be resolved— especially since giving up the war-torn, durable ovens is not an option.

“These ovens are so well built-they are used on naval ships and in the armed forces to feed troops,” Battista says. “These are bullet-proof work horses. And since the manufacturer no longer exists, there is just no option to purchase a new one. But we do find some old ones in defunct bakeries.”

Since Fauld’s, the oven’s original manufacturer, is out of business and only some spare parts can be found, the team at Lino’s must find creative solutions for the ancient oven it wants to make sure lasts another 40-plus years. For many years, the biggest problem was with the bearings failing—usually during rush hour on a Friday night.

Normal grease is not a solution for the bearings in this type of oven for many reasons, including the key factor that they are producing a food product that will be consumed. A graphite spray could be used, but the rotating mechanism made it difficult to install any kind of automatic greasing system.

The bearings were working hard, but when the catastrophic failure would happen, Battista was the only one who knew how to take it apart and repair it – along with help from the mechanic from the original oven company who was often available to assist.

“The oven guy loved to get my phone call in the middle of the night because it was always anywhere from a $2,000 to $6,000 fix,” Battista says. “We knew the ‘Achilles Heel’ was the bearings. I can’t tell you how many times I went to the local bearing place and asked if they had a better bearing…one that could handle the high temperatures, and one that wouldn’t break down. I had watched my dad modify machines all my life, but we didn’t think we could possibly modify a Fauld’s oven.”

Soon, a family friend from an engineering company connected Battista with Graphite Metallizing Corporation, which offered a customized solution for the bearings on the huge rotating ovens. The company created bushings made of self-lubricating Graphalloy, a material that can also handle the intense 500-degree Fahrenheit temperature of the gigantic ovens.

With two Fauld’s ovens in use—one is 10’x10’ with six shelves and the other is 10’x14’ with four shelves—the trays stay flat as the mechanism rotates like a Ferris Wheel. The trays sit in pillow flange blocks on either side so it can rotate flat. The original design uses an open-faced ball bearing to accomplish this. The ovens run at temperatures of 400- to 500-degrees Fahrenheit. They needed to spray graphite grease onto the bearings to keep them lubricated and keep the bearings working smoothly. These are not easy to get to in addition to the requirement of having to cool down the oven first.

“With this new material, I could get as fat as I wanted and not have to crawl inside that oven! Which is a dangerous job,” declares Battista. “Everyone thought I liked going into the oven, but I was just looking for ways to predict the failures.” 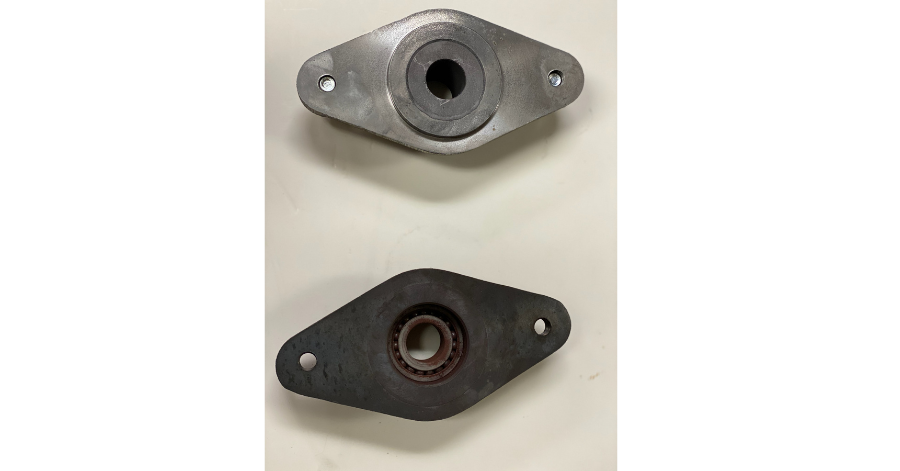 These new graphite bearings should last at least 40 years into the future. The oven would then be 120 years old, allowing Lino’s to grow stronger with its signature machinery. The Graphalloy bearings have been in operation for two years and continue to sustainably endure. “They are living quite happily in the oven and making a lot of pizzas,” Schweinler says.

This solution provides something that will work long term and without having to periodically stop the process, take the oven apart, and then let the oven cool down to perform the maintenance. The solution requires little maintenance and can be used for other similar-type ovens; for example, in rolling conveyors used in bakeries.

These bushings can be used in any application that has a very high temperature where self lubricating is required, or anything that is difficult to maintain. When equipment constantly fails and must be disassembled, causing unplanned downtime, this is where Graphalloy bearings shine.

For Schweinler, using the signature oven is important to the future of Lino’s. “It makes things a certain way that nothing else can,” he explains. “There are other ovens and technologies on the market that may cook things faster, or give a more crisp crust, or save energy, but this gets away from the character of our product. That oven is a secret part of who we are.”

Modifying the oven with the Graphalloy bushings made sense for the family with a history of re creating machinery.

“When I was a kid, I always wanted to be like Mike,” Joe Battista says. “Not Michael Jordan. My dad, Mike. He has a background (before we opened the restaurant) of modifying machines. From fixing a double amputee’s leg in the middle of the night to installing bathrooms in our six flat apartment in Chicago or modifying almost every single piece of equipment in our restaurant to make our operation faster and more efficient.…. He always had a lot of guts and is a ‘can-do’ guy. We were always looking for ways to use equipment that maybe didn’t fit the bill 100 percent. It almost always had to be altered in some way.”

The family drew from Mike Battista’s work experience in the research and development department of the Sunbeam Corporation. He would test sprinklers, lawnmowers, and kitchen appliances and find ways to make sure they were durable.

“I would go in on Saturday mornings with my Dad,” Battista remembers. “One side was the mechanical side which had all the guys working on electric knives and sprinklers, etc. The other side was the home economics side and they were testing the mix masters, toasters, and frying pans. I would get there around 9 a.m. and they would be making breakfast. They would be cooking pancakes and French toast, eggs, and bacon. It was like a mad scientist’s wonderland or like being in the lab with Q and James Bond, developing the next secret weapon that would save the world. With that experience, my Dad was able to make our place run better.”

Part of that creativity and experience translates into the decision to use the graphite bearings in their antique ovens.

“We have learned through experience that you can’t count on other people’s creativity,” Joe Battista says. “We have taken an integral part of our business—our oven—and modified it from being a ‘time bomb’ to a bullet-proof machine that we can count on. No matter what, we knew we only had so much time left on those bearings. The clock was ticking. We just never knew when it would explode. With these bearings, we don’t worry about it anymore. We can focus on other things. These bearings remove a heavyweight from management’s shoulders and keep the character of our company intact.”

Schweinler added, “Over the course of two generations of life’s work, our grandfather spent his entire life creating this company, and Joe has spent his entire life working on this business. Each generation has taken little pieces of the business and tried to simplify things to get us to that level where the business can last another 48 or more years. These bearings are just another piece of the puzzle that will sustain us and propel us further into the future.”

If you would like to learn more about Graphalloy or discuss a design solution with a Graphalloy Engineer, please reach out at graphalloy.com or email Eric Ford at eric.ford@graphalloy.com. 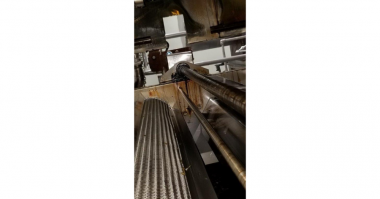 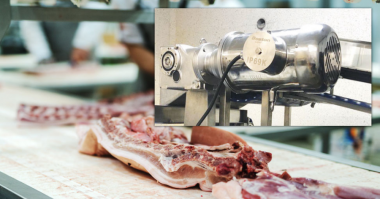 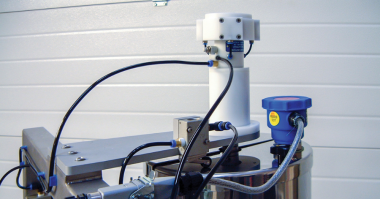 A major precision filling equipment manufacturer needed a reliable air motor/speed reducer for use on a new machine. During the…