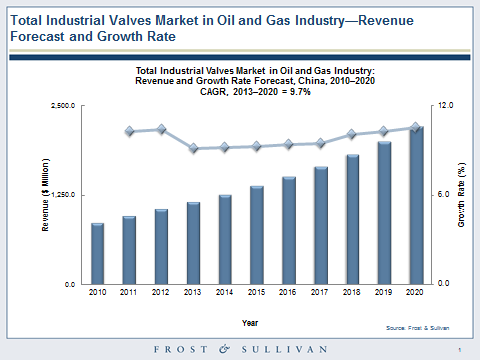 To reduce the reliance on coal and cope with air pollution, China is planning to develop cleaner energy supplies. Natural gas is expected to play a key role in the years to follow because of its low price and low emissions. Increasing demand for natural gas provides an impetus to the construction of gas pipeline-related projects in China.

Many pipeline projects have been implemented by the Chinese government to transfer oil and natural gas from resource-rich provinces and countries to other provinces; primarily, focus lies on connecting the Eastern markets with the Western resource-rich provinces to ensure supportable and sustainable development. This is expected to boost the industrial valves market in the oil and gas industry.

Industrial valves face unique and extremely adverse conditions in the oil and gas division, such as temperatures greater than 1,500 F and pressure higher than 25,000 psig, or cryogenic requirements and very low pressure.

According to Frost & Sullivan analysis, the oil and gas industry is the largest industry and accounted for 26.5% of the Chinese industrial valves and actuators market in 2013 because of heavy investments in the upstream, midstream and downstream segments. The oil and gas industry is expected to have a CAGR of 9.7% from 2013 to 2020, which shows a relatively high growth rate among other industries in China.

Upstream: Deep-water and FPSO developments are the latest in this segment, adding to the high demand for valves and actuators from upstream investments in oil and gas. Specifically, the demand for control valves will be high. Triple offset butterfly valves are gaining popularity in offshore production platforms due to their increased shut off, reduced weight and high efficiency, and this will eradicate the need for valve down time.

Downstream: The modernization of refineries is expected to increase the sales of valves in the downstream segment. The valves are designed to withstand high pressure, high temperature, complex metallurgies and metal sealing.

China has the largest shale gas reserves worldwide, with 36.08 billion cubic meters (bcm), and is likely to invest $150 billion to $200 billion on shale gas development from 2015 to 2020. Because of the complex geological structure in China, advanced exploitation technologies are needed. In China, most of the shale gas reserves are 1,500 meters to 4,000 meters in depth, which is deep when compared to reserves in the United States (800 meters to 2,600 meters in depth). Hence, shale gas development in China is more challenging.

The complex geological condition, lack of infrastructure and limited permission of exploitation are the stumbling blocks for shale gas development in China. With no technological breakthrough of access reservoirs, the Chinese government announced plans to reduce the production target from 60-100 bcm to 30 bcm for 2020.

There are 120 shale gas wells that have been drilled in China, while about 40,000 shale gas wells have been drilled in the United States. Although it is difficult for China to imitate the success of the United States in shale gas, the domestic shale gas production in China is expected to increase from 3.5 bcm to 6 bcm by 2015. The total number of operational wells is also expected to increase to 150 in 2015.

By late 2014, the world oil supply was on track to rise much higher than actual demand. Much of crude was unused and was simply being stockpiled. Due to the overcapacity, in September, prices started falling sharply. For oil-consuming countries, especially China, the world’s biggest net oil importer and consumer, the falling prices of crude oil is good news as it can suppress inflation.

Oil and gas operators and suppliers are concentrating more on increasing plant efficiency, decreasing operating costs, and reducing maintenance costs and downtime, leading to an increase in operating profits. This is expected to be a huge opportunity for industrial growth in the oil and gas industry. Industrial valve manufacturers who invest in R&D for continual improvement, and a complete valve automation solution with wireless monitoring and condition monitoring, will become the preferred manufacturers in the future. The market for control valves is growing faster than those for the on/off segment, and the trend moving forward is toward greater automation and optimization of processes. 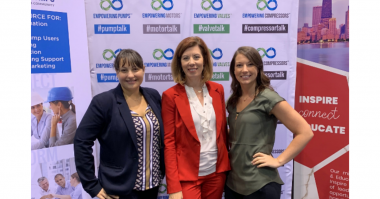 It’s no secret that this year, WEFTEC is going to look very different from what we’re used to. Being the… 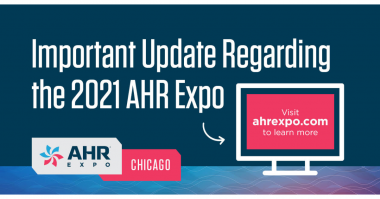 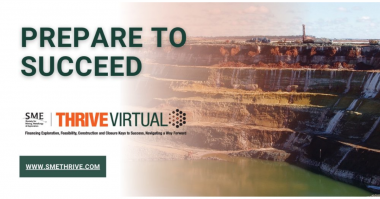 The Society for Mining, Metallurgy & Exploration (SME) is pleased to announce THRIVE VIRTUAL will be held on October 20-21,…